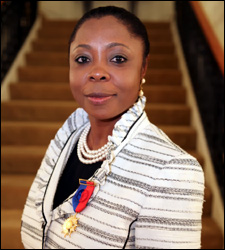 Sherry Tross, a national of St. Kitts and Nevis, was recently honoured by the Government of Chile – receiving one of the country’s top awards for her invaluable contribution towards bridging the gap between the Caribbean and the Americas.

Ms. Tross, who has worked extensively in the field of inter-American relations, currently heads the Summit of the Americas Secretariat at the Organization of American States (OAS). During her seven years at the OAS, she also served as Chief of Staff to the OAS Assistant Secretary General. Career stops also include Director of Business Development at the World Trade Center, Miami, and Program Director at the University of Miami’s North-South research center.

In presenting the award, His Excellency Moreno stated, “It is not only a well deserved recognition, but a fitting symbol, since in union and cooperation there’s a strength on which the  CARICOM (Caribbean Community) countries continue to give the rest of us valuable lessons, with their ability to act together within the international community and their quest to create a common market for its 16 million inhabitants.  There’s another 16 million people, Chileans, who also share that vision of union and cooperation with you.”

Ms. Tross told the St. Kitts and Nevis Information Service that she was surprised when she was notified about the award. “It was very, very unexpected,” she revealed.

An award ceremony was held at the residence of Chile’s ambassador to the White House. In her acceptance remarks, Ms. Tross noted that it was particularly gratifying “to receive this award in the wake of the Sixth Summit of the Americas which sought to draw attention to the importance of connecting the countries of the Hemisphere.” She pledged to “continue to do her part to advance cooperation and development in the Americas.”

St. Kitts and Nevis Ambassador to the United States and Permanent Representative to the OAS Her Excellency Jacinth Henry-Martin, who was present, lauded Ms. Tross’ consistent exemplary display of professionalism and commended her as a model of the modern global executive.

“Sherry is an inspiration to all Kittitians and Nevisians, particularly young people who are considering career options,” commented the Ambassador. “She is a world class national of St. Kitts and Nevis whose accomplishments transcend national and even regional boundaries.”