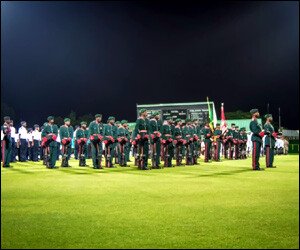 The theme for the 32nd Anniversary of Independence in St. Kitts and Nevis – United in Building a Stronger Nation – has resonated with citizens, as the twin-island federation prepares for a month-long national celebration in September.

The theme was released last week after its selection by the Federal Cabinet from a number of submissions. Several citizens going about their business in Basseterre on Wednesday gave it a thumbs up.

“I think the theme is very, very simple but yet strong in the [meaning] of the words,” Yasim, 23, explained. “It says united and we should be united in order to be a better nation.”

Twenty-one-year-old Shakeem had similar thoughts. “It sounds good to me,” he stressed. “It is saying we are going to build a stronger nation and that is what we want. We want something stronger and we want to come together.”

Tianna, 16, shared that the Independence theme was “encouraging” and “will have a good impact especially on young people” as it promotes a positive message.

That confident mindset in the youth population was highlighted by Martha, 59, who delved more into how a stronger nation can be built.

“Mothers {should look} at their children. Teach them, show them a good example,” she stressed, citing manners, and age appropriate clothing as good places to start. “We do need to change our mentality. The way we speak to people. The way we treat each other. We need to settle down, look at ourselves in the mirror, see who we are, where we come from and where we are going.”

The calendar of activities to celebrate Independence 2015 will be released later. Chairperson of the Independence 2015 Planning Committee the Honourable Wendy Phipps, has revealed that several subcommittees are busy finalizing arrangements for various events including the State Service, Independence Day Parade, Prime Minister’s Independence Lecture Series, Youth Activities and the Community Beautification Awards.