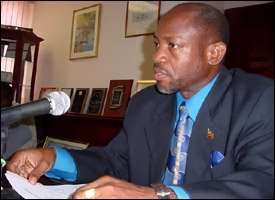 Speaking during his weekly radio programme “Ask the Prime Minister” on Tuesday, Dr. Douglas said the people of St. Kitts and Nevis have much to be thankful for.

“While circumstances have, unfortunately, caused the Eastern Caribbean to register deficits, this St. Kitts-Nevis Labour Government has been fortunate enough to have hard work produce four years of fiscal primary surpluses.

“We borrowed over the years for roads, schools, health care and much that is needed to make St. Kitts and Nevis a modern, progressive society, but the important thing is that international financial institutions are affirming that this Government’s record of debt service is outstanding,” said Dr. Douglas, adding: “Like the signs all over the country remind us, things are working here!”

“It is always a positive experience when dignitaries visit because not only is there the opportunity to deal with the substantive matters at hand, but they also get an opportunity to see, first hand, what, together, we on these tiny islands, have been able to accomplish,” said Prime Minister Douglas, pointing out, “one of my regional colleagues was commenting on just how well our transformation of the economy has been working.”

“He had read about our poverty reduction successes in the Caribbean Development Bank Report and I had just explained to him our success at turning thousands of ordinary Kittitians into homeowners,” said Dr. Douglas, who reminded listeners of those Kittitians who were demonstrating against St. Kitts and Nevis in New York a few months ago.

“Why they wanted to convey such a negative image of their own country, I’ll never know.  But I bet that those who will benefit from the 3,000 acres set aside for farming don’t agree with them.  And I bet that the thousands of families with children in government daycare centers, or overseas studying on government-arranged scholarships ““ or loans – wouldn’t agree either. Because, you know, there is a lot that is working – right here,” said Prime Minister Douglas.