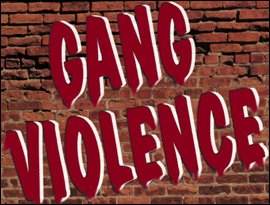 Say No To Gang Violence

Criminologist and Professor at the American University in Washington D.C. Edward R. Maguire Ph.D. has encouraged persons in the community to accept and embrace their responsibility in ongoing efforts to reduce gang activity in St. Kitts and Nevis.

During an interview with SKNIS, Dr. Maguire drew on his vast knowledge and experience to highlight a problem that he observed in various countries he has worked with.

“In too many communities that have gang violence problems, it is not considered a community issue,” he stated, adding that some persons seem more concerned with pointing fingers rather than developing solutions.

Dr. Maguire recounted an experience in an unnamed country where he attempted to engage members of the faith-based community “to determine what they can do to try to help out with this gang violence problem.”

“What they kept telling me is it’s a police problem and I kept saying no it’s a community problem,” he said. Eventually, one priest heeded the call and reached out to the gang members. After productive sessions, he was able to convince other faith leaders to join in engaging the youth.

Professor Maguire, who chairs the Department of Justice, Law and Society at American University, visited St. Kitts and Nevis from July 1 to 5, to conduct a Rapid Assessment on gang related activity. While here, he interacted with officials in the criminal justice system, gang members and community officials.

He shared some advice on the role that ordinary citizens can play.