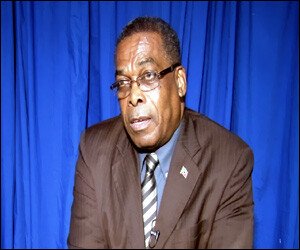 The Government of St. Kitts and Nevis has taken additional steps to bring relief to energy consumers in the Federation, as a Memorandum of Understanding (MOU) for Geothermal Exploration in St. Kitts was signed on September 04, 2015 in Guadeloupe with Tervanov, an engineering and services company.

Honourable Ian “Patches” Liburd, Minister of Public Infrastructure explained that St. Kitts and Nevis is faced with major challenges as it relates to energy and assured that the government has taken steps to ensure that renewable energy resources play a critical role in the sustainable development and economic growth of the twin-island federation.

Minister Liburd said that the government has “moved towards transforming the economy to a more sustainable mix and increase energy security.”

“The Ministry of Energy has embarked upon a programme that will seek to establish the potential of a geothermal resource on St. Kitts,” he said. “In the process, we seek to determine how best to develop that resource without retarding the resource on Nevis.”

He further added that the government has taken a comprehensive approach to energy planning which will address social and environmental issues, reliability of intermittent resources, as well as focusing on local capacity building.

Minister Liburd said that his ministry along with the St. Kitts Electricity Company (SKELEC) has established a road map to develop geothermal energy on St. Kitts on an industrial scale.

“We intend to replace to the best and to the greatest extent the feasible use of fossil fuel generation for energy requirements of St. Kitts and to add green generating capacity means,” he said. “The road map would also include the proposed methodological approach to the government validating this resource.â‚¬

A number of initiatives have reportedly been put in place that will lead to the success of the programme, which is expected to be completed in five years.

In April 2016, officials expect to see the launch of slim-hole drilling, a phase to be completed in six months.  A geothermal workshop, which is being organized for November 2016 will focus on the launch of grants, subsidies and concession loans. The launch of a commercial size demonstration well-drilling is anticipated for 2017 and in 2018 the geothermal resource final assessment and power plant. By the year 2020, the geothermal power plant is expected to be commissioned.