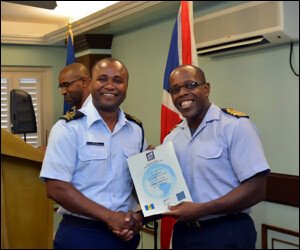 Captain Lynn Wilkin and Sergeant Charmin Bolus were among participants on the course from Barbados, Antigua and Barbuda, The Bahamas, Belize, Dominica, Grenada, Guyana, Jamaica, St. Lucia, St. Vincent & the Grenadines and Trinidad and Tobago, who attended the course delivered by a visiting training team of experts from the Royal Navy (RN) at the Barbados Coast Guard.

Certificates of completion were handed out by Commander Aquinas Clarke, Commanding Officer of the Barbados Coast Guard, and Lt. Commander Howard Clark, leader of the visiting RN Maritime Training Team at a closing ceremony at HMBS Pelican.

According to a news release from the British High Commission in Barbados, Lt. Commander Clark commended all the students.

“Not only have you improved your technical skill sets, but you have learned the all important skill of working closely with your colleagues from other CARICOM countries.  This will have a highly beneficial effect on future security cooperation throughout the region.”