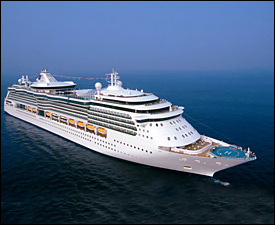 Royal Caribbean’s – Jewel of the Seas

St. Kitts and Nevis’ Minister of Tourism and International Transport, Sen. the Hon. Richard Skerritt delivered good news to the island’s tourism stakeholders in the National Assembly on Thursday.

“Inspite of the intense competition from global ports, and after months of relentless lobbying, it was therefore with great pleasure that we learnt last week that Royal Caribbean Cruise Line has decided to return to summer cruising in our region. They have decided to redeploy the Jewel of the Seas to the Caribbean from May to October 2013 to offer 25 sailings out of San Juan, Puerto Rico.  This decision will result in 16 additional calls to Port Zante during the summer of 2013, bringing over 33,800 guests,” he told Parliament and the Nation. Jewel of the Seas made one call to St. Kitts’ Port Zante during the 2011/2012 cruise ship season.

Minister Skerritt thanked Royal Caribbean Cruise Line for responding positively to once again offer year-round cruise options in the sub-region from next year.

“Jewel of the Seas will operate with three Southern Caribbean itineraries in the summer and autumn, and two itineraries in the winter and spring 2013-14 seasons. Departing every Saturday, the seven-night, round-trip itineraries include calls at a range of exciting ports throughout our sub-region, including St. Lucia, St. Kitts, Antigua, and the U.S.V.I., as well as St. Maarten, Barbados, Aruba and Curacao,” he said.

“On one itinerary, guests call at St. Thomas, St. Kitts, Aruba and Curacao, while the second calls at Barbados, St. Lucia, Antigua, St. Maarten and St. Croix,” he said.

He earlier pointed out that three years ago, St. Kitts welcomed the first summer ship from carnival cruise lines in 2008 and continued to schedule this weekly ship year-round to Port Zante.

“In 2011 we received an added bonus when Royal Caribbean Cruise Lines sent the Serenade of the Seas to our port every two weeks for last year’s slow season and for the entire duration of the year. This gave local cruise stakeholders even more reason to be happy because of the extra summer business that over the years they had grown accustomed to do without. Mr. Speaker, it was therefore with sadness and grave concern that we learnt last year that RCCL was repositioning the Serenade of the Seas out of the Caribbean completely in 2012. For St. Kitts that meant that we would have a one season only benefit from summer calls of the Serenade, and that for 2012 we would be back to the once weekly summer calls of the Carnival Victory, the ship which we look forward to seeing at Port Zante every Friday. For some other neighbouring islands who had been receiving calls of the Serenade year round for many years, the news last year of the withdrawal of the Serenade from our region from 2012 was devastating, to say the least,” Mr. Skerritt said.

He disclosed that as Chairman of the Caribbean Tourism Organisation, he arranged meetings last year between Eastern Caribbean Tourism Ministers and representatives of the Florida-Caribbean Cruise Association and followed up with his own one-on-one meetings in January this year with key decision-makers in the cruise industry to lobby for business in general, and to explore ways to entice cruise lines to bring back summer ships to the Caribbean and to grow cruise arrivals in the Eastern Caribbean, where growth in arrivals overall has trickled almost to a halt.

He pointed out said over the past year it had become clear to me that new Global cruise deployment focus had shifted away from the Caribbean for 2012-2013. Strategic deployment decisions taken by the lines, based on market expectations in 2010, are now being implemented. Back in 2010 the major lines saw fall off in demand for the Eastern Caribbean and new opportunity in Australia, Asia, South America, and Europe (Baltic and Western Med). Even Alaska is having better sales than previously.  This situation is compounded by the fact that no new ship build tonnage is slated for deployment in the Caribbean before 2014 while, as I said, some existing ships are being removed to other markets.

Another significant reason for the weak summer deployment and slow growth overall in this part of the Caribbean is that high fuel costs continue to force ships to sail more slowly over shorter distances in order to achieve optimum efficiencies. The result is that destination ports in the south-eastern Caribbean, which are further away from a home port, are suffering a loss of business. The increased cost of air travel has also rendered sub-regional home-ports like San Juan and Bridgetown less attractive to cruise lines and less tonnage is now being based there.

The tourism minister pointed out that the global recession has changed the face of tourism markets everywhere to become extremely personalized, customer focused and value-added.

“Today’s visitor is better informed, has numerous choices to select from, and does not have to come to our destination in order to enjoy their holiday. Cruise ships are mobile and can move from port to port and from region to region as their economics direct,” he said, pointing out that inspite of this good news today, “we must never assume that the impressive cruise sector growth that St. Kitts has experienced recently will continue smoothly and without set-backs.”

“In the final analysis, our survival as a cruise destination depends on our own ability to deliver value-added services to our guests on a sustainable basis. Our guests need to feel that we want them here. Visitors need to feel welcomed, and the needs of each guest must be respected individually if they are to give our destination a good report.  And I hasten to add that our guests do not expect to be harassed or want to experience angry situations, personal abuse, or petty local politics from anyone,” he said.

He noted that in spite of the ongoing challenges and various set-backs involved in market recovery for all types of Caribbean tourism, this good news is evidence that St. Kitts and the Caribbean region continues to show tremendous growth potential during this recovery period, and I can say with confidence that our tourism future is promising.