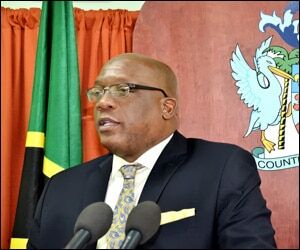 Prime Minister Dr. the Honourable Timothy Harris says that his government will clamp down on illegal workers on work sites without work permits in St. Kitts and Nevis and that the Cabinet is presently reviewing recommendations to impose penalty for late payment of work permit fees, revoking of work permits not in compliance with local laws, and limiting the number of work permits for entities.

Speaking at his first monthly press conference for 2016 on January 19, Dr. Harris said “We make it abundantly clear that the work place in St Kitts and Nevis must reflect predominantly citizens of St Kitts and Nevis and legal migrants into our country.

“Our people must never be disadvantaged in the land of their birth,” he said.

The prime minister also said that the Ministry of Labour will be more vigilant in monitoring the work market such as the construction, tourism and hospitality sectors “to ensure full and faithful compliance with the laws and regulations governing work permits and CARICOM skills certificates.”

“That being said we accept we are short in certain skill sets and that several entities are global in nature with policies for cross training and attachment.  We are not insensitive to these realities and our labor policy accommodates these situations,” Dr. Harris said, while asking “all employers in St Kitts and Nevis, not to be insensitive to Government’s policies and, at all cost, to operate within the four corners of the law.”

The prime minister said that a better system was being devised for improved coordination between the Labour Department, PEP, Social Security and National Security and that he urges “all employers to comply with the Immigration Act.”

“The Immigration Act clearly states that a person shall not engage or employ another person who is not a citizen or resident unless a work permit is granted.  There are penalties ““ fines and imprisonment for breach of the Act,” he said.