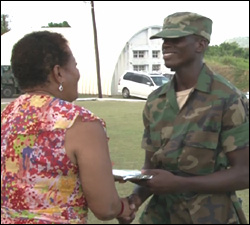 On Thursday 21 June 2012, the St Kitts-Nevis Defence Force (SKNDF) welcomed 24 soldiers to its ranks in an impressive and emotional passing out parade held at Camp Springfield, St Kitts.

Antigua and Barbuda Defence Force (ABDF) Training Officer, Lieutenant Troy Lake led the soldiers of the Basic Recruit Course 01/2012 onto the parade square accompanied by the Defence Force Band to tremendous applause by family, friends and well wishers.  He mentioned that this was the first time a joint training session was held between the SKNDF and ABDF and noted that it was “quite successful.”

Lt. Col. Wallace beamed with pride at the freshly minted soldiers on parade.

In her address to the young soldiers, Minister Liburd congratulated the graduating class and implored them to adhere to the core value of the St Kitts-Nevis Defence Force, “Courage” which she said would guide them throughout their careers.  She also highlighted that the Government would do everything it could to continue to support and bolster the ranks of the St Kitts-Nevis Defence Force, a promise that was met with loud approval.

BRC 01/2012 started training on January 31 in Antigua, with 35 civilians, two of whom were females. This number whittled down to 24 due to the rigourous and physically demanding intense military training.  For the recruits who managed to stay the course however, the passing out parade was a final show of the strength, discipline and precision training they had received.

As part of their programme, the soldiers received training in a variety of military fields such as map reading, field craft, law of armed conflict, navigation, drills and minor tactics, basic first aid, physical training and skills at arms.

Recruit Akeem Hendrickson was adjudged best overall recruit having earned awards for Best at Military Knowledge and Best at Map Reading and Navigation. Recruit Melissa Michael was selected most outstanding in Physical Fitness, while Recruit Bevon Francis was adjudged Best at Skill at Arms.

“I’m really excited now that I have passed out,” the new Private Hendrickson stated. “I can surely say that it has been tough but I survived and have made it through to the end. I will be the best soldier that I can be.”

“I am extremely proud because he came a long way,” said Private Hendrickson’s mother. She noted that growing up Akeem was a bit of a challenge and is pleased to see that he has transformed his life and made a 12 year commitment to the highly professional SKNDF.

After a weekend of rest and relaxation, the new soldiers report for duty 06:00 Monday morning (June 25).