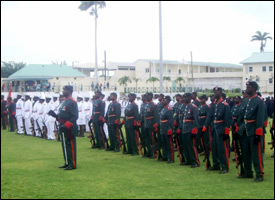 The St. Kitts-Nevis Defence Force (SKNDF) is inviting residents of the twin-island Federation to join in celebrating the achievement of a milestone.

On July 18, 1997, the Federal Parliament passed legislation to re-establish the SKNDF Regular Corps as an added resource to ensure internal security, to protect the shores from illegal smuggling and maintain the territorial integrity of the country. Its role has since expanded to include anti-gang efforts in collaboration with the Royal St. Christopher and Nevis Police Force.

To mark the 15 year anniversary, the SKNDF is hosting an open day on July 18 at its Regimental Headquarters, Camp Springfield, Basseterre and at its Coast Guard Base at the Deep Water Harbour in Bird Rock. The open day runs from 10:00 a.m. – 4:00 p.m.

The Force’s Public Relations Officer Captain Kayode Sutton told SKNIS that it was important to include the public in commemorating the occasion as the entity exists ultimately to protect the people.

“We are inviting the general public to come and look around the base,” he said, noting that there will be various exhibition stations. “We will demonstrate tactical military techniques, show a typical field medical station and have some of the equipment that we use on display. These include rifles, handguns and night vision gear.”

The Coast Guard Base will also have various displays and persons will be allowed to board and access certain areas of the cutter Stalwart. Tour guides and other military personnel will be on hand to answer questions. As expected, sensitive areas at both bases will remain off limits.

Captain Sutton extended special invitations to persons interested in joining the ranks. He explained that information on careers in the military as well as terms of service for the Reserve Corps will be available.

Later that week, members of the SKNDF will worship with the congregation of the St. Peter’s Anglican Church. The SKNDF Band will attend the July 22 service and is expected to perform several renditions. The event is also open to all residents.