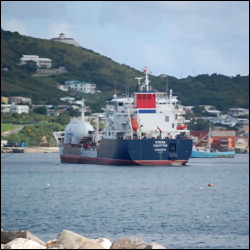 Training the Maritime Boundary Delimitation Negotiating Team, ratification of an ILO Maritime Labour Convention and scholarships for the training of two maritime lawyers in Malta are among the achievements of Department of Maritime Affairs in the Ministry of Transport.

In a few short years the small team has ensured that St. Kitts and Nevis became a full-fledged member of the Caribbean Memorandum on Port States seeking to eliminate sub-standard ships from plying their trade in the Caribbean region, provided International Maritime Organisation (IMO) training for over twenty port state control officers to enforce port state laws and hosted and co-ordinated various IMO courses for building capacity for the shipping sector.

Speaking at a stakeholders consultation aimed at establishing a National Maritime Policy and Action Plan, Minister of Tourism and International Transport, Sen. the Hon. Richard Skerritt said the department has aggressively pursued greater involvement and influence in the decision-making process of the International Maritime Organization.

He also told participants that the Department of Maritime Affairs has also partnered with the Department of Marine Resources to co-ordinate study of coral reef by Living Ocean Foundation in 201, ensured that St. Kitts and Nevis became a party to the North East Atlantic Fisheries Commission and established a DATA Centre to receive ship security alerts from St. Kitts and Nevis-flagged vessels attacked by pirates in international waters.

The Department of Maritime Affairs, which is managed by its Director, Mr. Mc Clean Hobson has also entered into over 20 memoranda of understanding with other states to recognize Seafarers certificates, invested in State of the art software to check the authenticity of Seafarers certificates on line and ensured that St. Kitts and Nevis became a party to the UNESCO Underwater Cultural Heritage Convention to protect the underwater cultural heritage of St. Kitts and Nevis.

The department will also ensure that port facilities in St. Kitts and Nevis continue to meet the requirements of the ISPS Code, actively pursue the development of local hydrography to better facilitate maritime trade in St. Kitts and Nevis and put plans in place to address the issues of the discharge of ballast water.

The Department of Maritime Affairs is also in the process of giving effect locally to the Standard of Training, Certification, and Watch Keeping for Seafarers (STCW) Convention to create training standards for St. Kitts and Nevis seafarers and is partnering with the Department of Marine Resources and the Clarence Fitzroy Bryant College (CFBC) to establish a maritime education and training course at the CFBC.