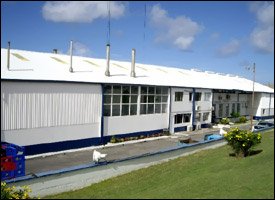 The Manufacturing Sector in St. Kitts and Nevis grew by 6.5 percent in 2007, generating over 10 percent of the Federation’s Gross Domestic Product.

Minister of Finance, Dr. the Hon. Timothy Harris said although this favourable rate of growth is consistent with the efforts of the St. Kitts-Nevis Labour Government to have a diversified economy in which light manufacturing plays a significant role, it is clear that a long and deep global financial crisis could be devastating to the Manufacturing Sector.

He disclosed that growth in output of the sector in 2007 was broad-based with the main categories namely, beverages, masonry products and electronics increasing their outputs by 7.8 percent, 1.9 percent and 0.5 percent respectively.

“Much of the increase in the beverage category was due to increased exports to the neighbouring islands of St. Martin, St. Eustatius, St. Barts, Antigua and Barbuda and Anguilla,” said Dr. Harris, who added that cargo throughput statistics from the St. Christopher Air and Sea Ports Authority reveal that 5,379 tons of beverages were exported from the Federation in 2007 and this  trend is expected to continue in 2008 and 2009.

Finance Minister Harris noted it was clear that a long and deep global financial crisis could be devastating to the Manufacturing Sector although it is disheartening as there is no convincing prediction as to when the U.S. economy and the global economy will recover.