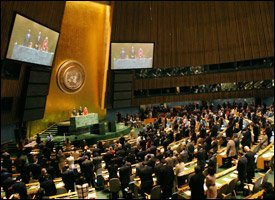 St. Kitts and Nevis was among 18 nations elected on Wednesday by the United Nations to serve on the Economic and Social Council (ECOSOC).

ECOSOC is one of the principal organs of the United Nations and membership is for three-year terms starting 1 January next year.

The four new members were chosen from Latin America and the Caribbean: Guatemala, Peru, Saint Kitts and Nevis and Venezuela. They replace Cuba, Guyana, Haiti and Paraguay.

Eleven new members were chosen for the 54-member body, which coordinates the economic, social and related work of the various UN specialized agencies, regional commissions and functional commissions, and seven others were re-elected.

ECOSOC members are chosen by secret ballot and according to geographical grouping, and its overall membership is divided between 14 African countries, 13 nations from the Western Europe and Other States grouping, 11 Asian States, 10 countries from Latin America and the Caribbean and six from Eastern Europe. This year none of the races for open seats were contested.

In the African category, Guinea-Bissau was re-elected while CÃ´te d’Ivoire, Mauritius, Morocco and Namibia were chosen to succeed Angola, Benin, Madagascar and Mauritania.

Japan and Saudi Arabia were re-elected to the seats allocated as part of the Asian contingent, and India replaces Sri Lanka, which is retiring. In the Eastern European category, Estonia succeeds the Czech Republic.

France, Greece, Liechtenstein and Portugal have been re-elected from the Western European and Other States category, while Germany was chosen to succeed Austria. Iceland is also relinquishing its seat for the remainder of the term ““ not due to end until 31 December 2010 ““ to Norway.

Cameroon, the Republic of Congo, Mozambique, Niger, China, Malaysia, Pakistan, the Republic of Korea, Poland, Moldova, Russia, Brazil, Saint Lucia, Uruguay, New Zealand, Sweden and the United Kingdom are slated to end their terms as members at the end of 2010.