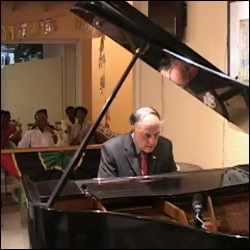 Classics by Beethoven, Chopin, Liszt, Debussy and others echoed through the Sugar Bay Club on Wednesday evening, as the United States Embassy partnered with the Ministry of Tourism, Sports and Culture in observance of 25 years of Independence in St. Kitts and Nevis.

Internationally renowned pianist Roman Rudnytsky of the United States entertained an appreciative crowd at a piano recital held under the distinguished patronage of His Excellency the Governor General. Rudnytsky, who has performed in more than 80 countries worldwide, told the gathering that he has been to St. Kitts several times before and always enjoys return visits.

His stay here is facilitated through a public diplomacy programme offered by the U.S. Embassy in a bid to expose persons from different countries and region to positive facets of American culture.

Public Affairs Assistant ““ Exchanges at the Bridgetown-based Embassy, Mary Graves told SKNIS that she was pleased to be here at this time to help the Federation celebrate nationhood. She added that the U.S. Embassy is considered by many to be just an issuer of Visas and they are passionate about promoting the other services it offers to countries such as cultural presentations and scholarships.

Sometime during the piano recital, Mr. Rudnytsky confessed that he scanned the audience searching for familiar faces. The persons he was looking for were high school students that he spent the morning with while facilitating a master class.

Music Specialist at the Department of Culture, Nigel Williams revealed that 12 students attended the class where advanced techniques of playing the piano were explored. The music students eagerly tapped the experience of the celebrated pianist who matched their enthusiasm when providing advice.

In the end, Mr. Rudnytsky was not disappointed. He received a tremendous standing ovation from the audience and he did see the smiling faces of several of the students who he reached out to earlier that day.