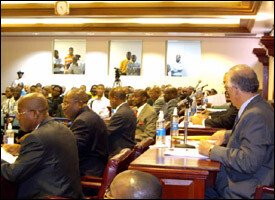 The St. Kitts and Nevis National Assembly is expected to increase the age of consent from 16 to 18 when it meets this Tuesday.

Attorney General and Minister of Justice and Legal Affairs, Hon. Dennis Merchant will pilot through the lawmaking body, the Criminal Law Amendment (Amendment) Bill, 2008, which expressly provides that the age of consent in the Federation of St. Kitts and Nevis is 18 years old.

“This age of consent is consistent with the age a person is considered an adult in accordance with section 3 of the Age of Majority Act. No. 15 of 1983.

The age of 18 is also consistent with the age a person is deemed responsible enough to drink and to drive in the Federation as provided by Section 31 of the Liquor Licence Act, Cap 252 and Section 32 of the Vehicles and Road Traffic Act, Cap. 270.

A explanatory memorandum from the Legal Department, notes that  “a person is restricted from marrying when he or she is under 18 years old, according to Section 28 of the Marriage Act, hence the age one is legally permitted to marry should coincide with the age one can legally give consent to engage in sexual activity.

It notes that a person between the ages of 16 and 18 may marry with the consent of certain specified persons.

An exception is made persons between 16 and 18 years who are married to engage in sexual activity with their spouse.