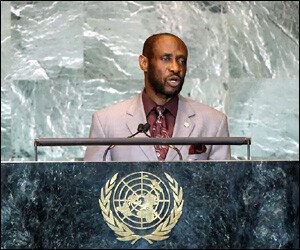 Sam Condor at The United Nations

Citing the need to have “the right people at the right place” St. Kitts and Nevis Prime Minister Dr. the Honourable Timothy Harris unveiled a robust list of professionals appointed to fill Ambassadorial posts.

At a press conference on Wednesday (May 27), Prime Minister Harris announced that, Sam Condor was designated as Ambassador Extraordinary and Plenipotentiary and Representative to the United Nations.

“Mr. Condor will fill the vacancy created by the resignation of Mr. Delano Bart, Q.C.,” the Prime Minister said. “Mr. Condor has served as a Deputy Prime Minister and served as a Minister of Foreign Affairs and has what it takes to commence this assignment and deliver results from day one, and there are several important issues on the United Nations agenda, and with Mr. Condor’s leadership, we expect excellent results.”

Dr. Thelma Phillip-Browne was named the Ambassador to United States and will be resident in Washington D.C. Dr. Browne is a well known medical practitioner and dermatologist, with a wide range of experience in the delivery of health services.  “She is a professional woman who will make a difference in our diplomacy with our most significant international partner – the United States,” Prime Minister Harris stressed.

In addition, Dr. Everson Hull is designated as Ambassador to the Organization of American States (OAS). Dr. Hull is an academic whose extensive work in the field of Economics has cemented his value to the Nevis Island Administration (NIA) in the area of economic policy formulation.

Shirley Skerritt, career diplomatic formerly attached to the OECS Mission and Embassies in Brussels has been confirmed as High Commissioner to Canada based in Ottawa.

Verna Morris, a career Foreign Service Officer will be assigned to Cuba as Charge d’ Affaires.  Ms. Morris has served in the Ministry of Foreign Affairs for 10 years. She is a graduate of universities in Cuba and Mexico. Her appointment will fill the void created by the recall of Ambassador Kenneth Douglas.