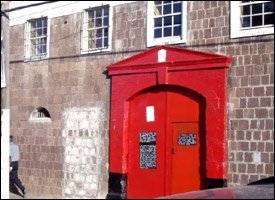 St. Kitts and Nevis Attorney General and Minister of Justice and Legal Affairs, Hon. Dennis Merchant is expected to make a statement in the National Assembly Friday morning on the Federation’s first execution by hanging in 10 years.

The statement is expected during the continuation of the 2009 Budget Debate, which enters third day Friday.

“Pursuant to the warrant under the Hand and Seal of His Excellency the Governor General of the Federation of St. Christopher and Nevis, dated the 15th day of December 2008, the sentence of death pronounced at the Circuit Court on the 28th day of February 2006 on Charles Elroy Laplace will be carried into execution within the walls of the Prison in the town of Basseterre in the island of St. Christopher on the Friday 19th December 2008 at 8 o’clock in the forenoon,” a statement posted on the prison gate stated Thursday.

The National Assembly reconvenes at 10 o clock this morning.