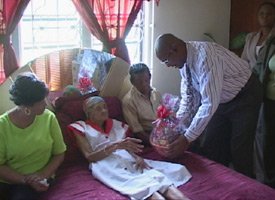 Visits to senior citizens by Ministers of Governments are a year round activity, but October’s Month of the Elderly have heightened the occasion, and made it even more special for celebrants and the honoured seniors.

The touring party which also included Director of Community Affairs, Jovil Martin as well as Supervisor of Social Assistance, Ann Wigley made six stops today (Tuesday) to salute the oldest persons in the East and Central Basseterre districts. One such visit was to 101-year-old Violet Gumbs of Bird Rock. Minister Herbert said he was pleased to be in the company of a strong nation builder.

“You have lived a long life, you have lived a fruitful life,” he stated. “We want to thank you for the way you raised your children because most of them are [making productive contributions] to society. He added that the contributions of Ms. Gumbs and other seniors must not be overlooked as they played a pivotal role in the development of the country.

The Minister of Social Development expressed sincerest wishes on behalf of the Cabinet and assured that Government remains committed to providing quality health care and other services to the elderly.

“Our homecare officers are [doing] a good job,” he noted. “They have been able to visit the elderly and I am sure their companionship is valued by the elderly. Our elderly must feel wanted. They must feel that they have made their contributions and can now live out their years in dignity.”

Ms. Gumbs was extremely proud and said she looked forward to the annual visits which showed that the elderly were appreciated and had not been forgotten.

Other persons visited were Ann Penny, 94, of Ponds Extension; Matilda Webbe, 96, of Rose Lane; Alice Browne, 95, of Newtown; and Samuel Walters, 93, of Fern Street. Maude Nisbett, 97, – a long standing community leader – was also recognized. Due to her past accomplishments, officials renamed the Alley where she resides at, in her honour.

Each person thanked the touring officials for the tributes. “It’s very nice. Thank you,” cried a grateful Alice Browne.

Visits to the oldest persons continue all month long. Also, noteworthy of mention is the October 08, birthday of Mary Bradshaw of St. Paul’s who was born in 1901.