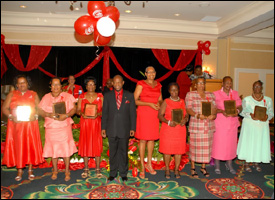 The governing St. Kitts-Nevis Labour Party honoured eight (8) mothers from each of the constituencies on St. Kitts.

Before the over 600 delegates and invited guests at the St. Kitts Marriott Resort during the 80th Annual Conference of the St. Kitts-Nevis Labour Party last Sunday, the mothers were honoured with corsages, roses and gifts by National Party Leader, Prime Minister, the Rt. Hon. Dr. Denzil L. Douglas and Minister of Health and lone female Cabinet member, the Hon. Marcella Liburd.

Constituency # 1 – Ethelinda Chumney, mother of seven, and grandmother of eighteen, was born on the July 25th, 1954 in Newtown.

Her mother, Vivian Chumney of Phillips’, was a Labour Party activist and attended every function that the Party held.

From an early age Ethelinda can recall, she was a member of Young Labour and couldn’t wait to turn twenty-one to vote for the Labour Party. When that time came, she lived at Buckley’s with her mother so she voted for the late Joseph N. France.

Besides being a list worker in the constituency, she also lends her strong soprano at every occasion that the East Basseterre Branch has a choir.

Constituency #2 – Blondina Huggins-Jeffers was born on the island of Nevis.  At a very early age she was introduced to the St Kitts-Nevis Labour Party by her late uncle Mr. Edgar Bridgewater, during the time of the late Eugene Walwyn, who represented the Labour Party on Nevis.

When she moved to St. Kitts she became a member of Young Labour and has continued her lifelong support for this Great Labour Party Movement.

Over the years she has witnessed how this wonderful Party has transformed the lives of our people in very positive ways, through decent and affordable housing, employment opportunities as well as providing thousands of scholarships for the benefit of our young people in a variety of disciplines.

She would like to thank the Honourable Marcella Liburd and the constituents of Constituency #2 for recognizing her as the Mother of the Year.

She would especially like to thank the Honourable Marcella Liburd for her exemplary leadership within the Constituency and the Party as a whole.

Blondina is very happy to be a part of the Celebration of this Great Party’s 80th Anniversary and wishes the Party continued success and God’s blessings forever.

She is the proud mother of five (5) children.

Constituency #3 – Millicent is actually a very ordinary individual, but in her tiny and humble appearance a woman of extraordinary fortitude, and perseverance and a very kind-hearted person.  She is also a persistent woman with strong will-power, who had to face tough challenges in life, but is the kind of person who always demonstrates great zeal.

Millie’s life has been filled with many challenges. Growing up in a poor family, Millie had to start working at a very early age in order to support her family. It is for that reason she worked in the Sugar Industry for over thirty five (35) years until its closure. She is a proud mother of four children and grandmother of seven.

Millie, as she is affectionately known, is an ardent supporter of the St. Kitts-Nevis Labour Party.  Her love for the Party became more evident as she performed the duties of a Party Agent.

The West Basseterre Branch of the St. Kitts Nevis Labour Party is proud to salute Mrs. Millicent Roger ““ Williams as its Mother of the Year.

Constituency #4 –  Mrs. Ella Flemming affectionately known as “Witty” by the people of constituency #4 is a well-respected and active member in the area of Old Road.

Mrs. Flemming married Warrington “Macma” Flemming some 25 years ago and together they are proud parents of a beautiful daughter, Christine Sudatt and two handsome sons Roger and Calvert Flemming as she delightfully describes them. Together they have made her grandmother to thirteen grandchildren.

Mrs. Flemming works at Caribelle Batik, a place that she knows like the back of her hand as she has spent over 20 years there. “I love the Lord” is the motto that Mrs. Flemming lives by everyday. She is an active member of the Ebenezer Methodist Church in Old Road.

Mrs. Flemming holds the position of Superintendent of Sunday School, Captain of the Girls Brigade another area in which she has spent more than 20 years of her life and she is also a member of the Women’s Group.

Constituency #5 proudly salutes Venola Drew as Mother of the Year.

Venola Drew – who is she? Born under the sign of Leo, Venola or “Debbie” as she is affectionately called, is the daughter of Charles Lake and Agnes Drew, two Labour Stalwarts.

Ms Drew is the mother of seven (7) children. She is a housewife and a business woman, but makes time to assist with functions that the Party Branch organises. Venola never makes excuses to make her unable to show tangible support.

“Debbie” is encouraging her children to become self employed.

Constituency #6 – Born, bred and still residing in the little village of Dieppe Bay.  Ryllis met and married Guyanese born Alvin Vasquez some 33 years ago.  A union that produced two handsome sons to whom she has devoted her life.

Ryllis is a born again Christian who loves caring and helping others. She enjoys being active in church and community work and continues to be revived and rejuvenated by working with young children in the Christian Life Club.

Mrs. Vasquez is proud to have served as a teacher for 20 years, as well as having worked in several other areas in the Public Service for a total of some 35 years. She counts it an extreme privilege to be able to continue to serve her country in her present capacity.

Her greatest joy however, is derived from being part of the Basseterre High School Alumni group that provides scholarships, nurtures and mentors current high school students right through to University if necessary.  Her prayer is that we will continue to work together in unity and harmony for the good of our party and great nation.

Ms. Matthew is the mother of seven children five (5) boys and two (2) girls. She is also blessed with twelve (12) grandchildren and one (1) great grandchild.

In her youthful and productive years Dya Sharry worked in the Sugar Industry and as a Domestic worker. She is now enjoying her retirement.

Dya is a dedicated and active member of the Holy Family Catholic Church in Molineux. She is a member of the Senior Choir. Dya is also dedicated to her community where she visits the sick and shut-in every other Thursday sharing words of inspiration.

Her dedication has also been to the Labour Movement to which she is a very strong supporter.

Dya appreciates the recognition and honor bestowed on her today by her beloved Member of Parliament Dr the Hon Timothy Harris and the Conference.

Constituency #8 ““ Ms. Natalie Bloice was born in the village of St. Paul’s to Katherine Bloice and Denzil Carty on 24 August 1965.  In 1985 she moved to the village of Conaree and continues to be a strong advocate of the St. Kitts-Nevis Labour Party.  Natalie is the mother of four children and grandmother of four. Natalie has embraced her adopted home of Conaree and Constituency #8 and is an active member of the Branch.

She, along with her children, can be seen rallying the people of Conaree for meetings, organizing different venues for events and supporting the Labour Party and Cedric Liburd in all that they undertake.  For Natalie, working for the Party is a family affair as she ensures that all her children are on board with the activities.  Whether it is Trevelka running the errands or carrying around the letters for constituents or Trecie picking up the broom and organizing the Constituency Office, for Natalie and her family it is a labour of love and a deep love of Labour.