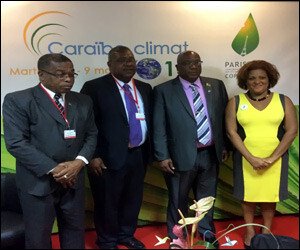 The Climate Change Declaration document makes a special appeal to the conscience of the world’s richest countries to do their part to help small island developing states. Caribbean heads of state are hoping that the “Declaration of Fort de France’ will result in a unified voice to the unique challenges and solutions to climate related issues in their region. The tourism dependent countries have maintained that despite their small sizes and negligible contribution to global gas emissions, they are among the most vulnerable to the impacts of climate change.

13 Caribbean leaders, including Prime Minister Dr. Timothy Harris along with Cuba’s Environment Minister attended the one-day Martinique summit, Saturday, which was chaired by French President Francois Hollande. The landmark gathering gave regional leaders an opportunity to put forward a joint policy position ahead of the 21st session of the Conference of Parties to the United Nation’s Framework Convention on Climate Change in Paris in December.

Chairman of the 9-member Organization of Eastern Caribbean States (OECS), Dominican Prime Minister Roosevelt Skerrit said the summit gave the islands a chance to ensure that concerns of the Caribbean receive due prominence in the Paris talks. Skerrit also said climate change is an issue that affects the very survival of small island states in the Caribbean. “We remain convinced that the global goal of limiting average temperature increase to no more than 2°C above pre-industrial levels is inadequate for protecting fragile ecosystems in SIDS from the adverse impacts of climate change, and that a target rate lower than 1.5°C would be more appropriate,” he said. “We are painfully aware that in the Caribbean, some ecosystems are already approaching the limits of their adaptive capacities, presenting major challenges for the livelihoods of the people. We therefore reiterate the call for urgent and ambitious action by developed country parties in particular, geared toward achieving this target.”

Chairman of the Caribbean Community bloc, Bahamian Prime Minister Perry Christie spoke of the urgent need to close the gap between the mitigation emitters and the level of effort required to decrease the global average temperature. “Any Paris outcome must include; clarity on ambitious targets for developed countries, clarity on the adaptation measures and resources required to facilitate and enhance the sustainable development plans and programmes in SIDS and clarity on measures and mechanisms to address the development challenges associated with climate change, sea level rise and loss and damage for small islands and low-lying coastal developing states,” he said. Meanwhile, President Hollande urged “rich countries to help poor countries fight global warming,” adding that “if there is nothing in terms of finance for countries that are the most vulnerable and the poorest, they won’t follow you.”

St.Kitts-Nevis Prime Minister Dr. Timothy Harris commented on the historic conference and stated, “I am honoured to be part of this historic conference.  Climate change is one of the most important issues of our day.  We must do everything in our power to ensure that we coexist peacefully with our environment.  We must work together as Caribbean neighbors to impress upon the world that we are interdependent of each other.

Dr. Harris continued  to say: “No man is an island, no man stands alone, each man joy is joy to me, each man’s grief is my own. We need one another, so I will defend each man as my brother, each man is my friend.”

The landmark summit gave regional leaders an opportunity to state a joint policy position ahead of the United Nations Framework Convention on Climate Change (UNFCCC) COP21 Paris meeting to be held in November and December.