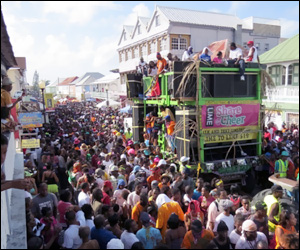 Thousands of St. Kitts – Nevis residents, returning nationals and visitors filled the main streets of downtown Basseterre, Thursday, December 26th in what has been described as a massive Jouvert- the best in its history.

As revelers in the Jouvert Bands ““ live music or hi-fi left their various locations, throngs including thousands from four visiting cruise ships, joined in a massive display of dancing, looking on, drinking and eating.

Never in the history of Jouvert had that the crowds patronize the bars and various stalls set up along Fort Street, Central Street, West Independence Square Street, and the Bay Road stretching from the General Post Office to the Ferry Terminal, long after the jamming ended.

More photos can be seen here