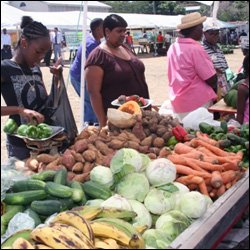 Tourism in St. Kitts and Nevis is expected to rise to higher heights when a new Agro-Tourism Demonstration Farm is completed at Sir Gillies, Sandy Point.

In an auspicious groundbreaking ceremony on Tuesday afternoon, chairperson – Acting Agriculture Permanent Secretary Ashton Stanley said this modern agro-processing facility will offer a true experience of agro-tourism and its expertise to tourists.

The Taiwan International Corporation Development Fund (ICDF) funded farm facility saw evolution over the years. The Taiwanese Agricultural Experimental Farm became the Needsmust Demonstration Farm, and is now the Agro-Tourism Demonstration Farm Co-operation Project. Relocation of the farm was considered to prevent contamination of the Basseterre valley aquifer. The identification of a suitable plot of land in the Newton Ground area met with Cabinet’s approval in 2009.

The Republic of China’s Resident Ambassador His Excellency Mr. Miguel Tsao shared a very similar vision with the Federation’s Prime Minister the Right Honourable Dr Denzil Douglas to create a new multifunctional farm that would suit the locality and promote economic growth. After acquisition of some 20 acres of farm land at Sir Gillies, work began on fencing and laying of irrigation pipes, construction of a 15,000 gallon reservoir, a two story office building, a work shed and a six room dormitory ““ all of which were completed by 2010.

In early 2011, a feasibility study team comprising one of Taiwan’s top Tourism professors, the Chief Executive Officer of Taiwan’s Leisure Farm Development Association and the Executive Head of Taiwan Power Corporation arrived in St. Kitts to discuss evaluation and design of a blueprint for green energy for the Agro-Tourism Farm.

In brief remarks at the groundbreaking, Ambassador Tsao said St. Kitts and Nevis has many characteristics conducive to the promotion of an agro-tourism farm.

“Since I assume the office as Ambassador to this beautiful country, I have personally experienced the breathtaking scenery and the captivating landscape that the Federation has to offer, and those are indeed worthy in promoting the agro-tourism farm” said Ambassador Tsao.

He also said this type of farm will contain features that will merge the two cultures of St. Kitts and Nevis with Taiwan.

The Honourable Richard Skerritt, Minister of Tourism said the project, is unlike any other in this part of the Caribbean.

“It is not only a perfect illustration of educational entertainment and a scenic, commercial and natural attraction, but also an excellent opportunity to continue further diversification of the economy” said Minister Skerritt.

Minister of Agriculture Honourable Dr Timothy Harris expressed pride in the fact that this facility will move Agriculture in St. Kitts and Nevis to another level.

“Today we move our corporation to another level ““ agro-tourism” said Dr Harris. “By vesting in an agricultural field station, a modern greenhouse and a Taiwanese-type Teahouse, and offering an opportunity for our tourists to receive tours of the farm and experience the rustic reality of farm life in St. Kitts and Nevis.”

He further noted that this facility is perfectly positioned to give visitors the opportunity to enjoy a real agro-tourism experience.

“Positioned at the turnaround point of the Scenic Railway, this facility will offer an opportunity for visitors to really enjoy and agro-tourism experience through guided farm tours on a pick and pay system” said Dr Harris.

In order for an agricultural tourism effort to thrive the country must learn the success factors that it needs to focus on ““ namely, farm size, the presence of water and adequate costing.

Prime Minister the Right Honourable Dr Denzil Douglas, in his feature address said the Minister of Energy is doing all in his power to move the Federation away from its traditional fossil fuel dependence and in the direction of green energy.

“Our minister of Tourism,” the Prime Minister said, “is constantly seeking innovative ways to make the Federation’s tourism product much more intriguing and much more competitive.”

Prime Minister Douglas noted that some international travelers are interested in sea and sand, some in history and architecture, and some in simple escape and revelry, but there are others who are interested in nature.

“”¦there is a significant segment of travelers however, that is interested in nature, our natural country, the nature of our country, in traditional herbs and medicines, in the flora and the fauna of the countries that they visit” said the Prime Minister. “And so this Agro-Tourism Demonstration Farm was designed specifically with that segment of the international community with that segment of the international traveling community in mind.”

It is expected that this agro-tourism project will present the young people of the Federation with another face of agriculture and another use to which our lands can be put.