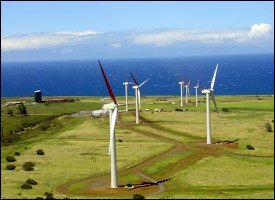 Wind Farm On A Hawaiian Island

The Government of St. Kitts and Nevis has approved in principle a proposal for the generation of wind energy on St. Kitts. Official testing is to begin shortly.

The decision was taken at Monday’s Cabinet Meeting under the chairmanship of Prime Minister Hon. Dr. Denzil L. Douglas.

“Remaining committed to its policy of diversifying the energy sector to achieve lower energy prices sustainable over the long term, Cabinet approved in principle a proposal for wind energy generation on St. Kitts. The proposal was jointly submitted by a local interest and a group of foreign investors,” said Minister of State for Information, Sen. the Hon. Nigel Carty in the post Cabinet Briefing.

Mr. Carty said the St. Kitts-Nevis Labour Party Cabinet also mandated the establishment of a renewable energy unit whose purpose is to fast track and coordinate the development and use of renewable energy.

He said the unit will work closely with the newly approved wind developers as well as with West Indies Power (Nevis) Ltd, the geothermal company on Nevis.

Minister responsible for Energy, Hon. Dr Asim Martin, informed the cabinet that he had recently signed a letter of intent with West Indies Power (Nevis) Ltd as an agreement in principle to acquire cheap geothermal electricity once the source becomes fully operational.

Dr. Martin emphasised to the cabinet that the geothermal source creates the prospect of cheap electrical energy and the drastic reduction of fossil fuel consumption over the long run. This, he said, would reduce cost and promote investment and economic development.