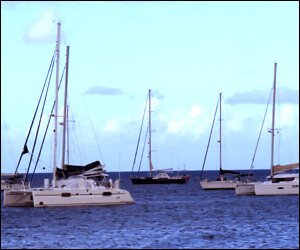 The unlocking of the St. Kitts and Nevis National Yachting Policy has tremendous potential and will create major economic opportunities for the people of the twin-island federation.

Director of Maritime Affairs, Mr. McClean Hobson speaking at the launching ceremony of the National Yachting Policy on Thursday at the St. Kitts Marriott Resort said the challenge is the methodology that is put in place in order to develop a sustainable yachting sector.

Mr. Hobson was optimistic once Minister of Tourism and International Transport, Sen. the Hon. Richard Skerritt continues to provide the leadership for the yachting industry at the federal level.

“It is critical that all the stakeholders work together to develop this most important sector,” said Mr. Hobson, who pointed out that shortly after joining the Ministry of Tourism and International Transport in 2010, it is impossible for me to recall the number of times I was told by Minister Skerritt that we needed to do something to enhance and grow the local yachting sector,” said Mr. Hobson.

He added that Mr. Skerritt was eager to see the yachting sector move from its current stage and be developed in a way that would not only be more competitive, but create substantial economic opportunities for the people, while leaving a lasting impression on the minds of the visitors who come to these shores by yachts.

Mr. Hobson said Minister Skerritt felt strongly that moving forward must be based on gathering the relevant data.

“On this basis, my first assignment from Minister Skerritt was to do a baseline study of the yachting sector. On completion of the study in 2012, among the recommendations that were put forward, was the creation of a Yachting Oversight Committee and the creation of a National Policy to guide the development of the Yachting Sector,” said Mr. Hobson, who indicated that in April 2013, with the support of the  Federal Cabinet, Minister Skerritt established and commissioned the St. Kitts and Nevis Yachting Development Task Force and later requested the assistance of ECLAC to develop the St. Kitts and Nevis National Yachting Policy.

He further disclosed that work on the policy commenced in late 2013 by Elizabeth Thompson, a former government minister of Barbados and consultant engaged by ECLAC specifically for this project.

“Extensive consultations coupled with countless email exchanges were carried out with local stakeholders. This was followed up with a presentation by the Consultant on the first draft of the policy in January this year. Following that presentation, additional comments and feedback were provided to the Consultant and has resulted in the final version of the policy which we are here to officially launch this morning,” said Mr. Hobson.

He pointed out that there are many ideas to develop the yachting sector, which must be documented in one place to guide the process.

“This is exactly what the federal government is attempting to do by creating this policy. It is by no means perfect, reviews will be done and changes will be made as we progress, but I am certain that we have captured all the salient points in one document to chart the course for the sustainable development of the yachting sector in St. Kitts and Nevis,” Mr. Hobson said.