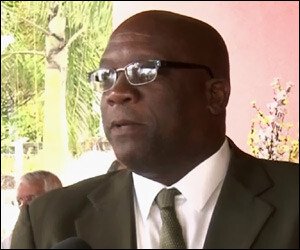 PM Harris Speaks Out On Crime

Prime Minister Dr. the Honourable Timothy Harris has urged criminal elements in St. Kitts and Nevis to “stop and think again” about their destructive actions and instead join in building a better Federation.

The call was made in his capacity as Minister of National Security, in a statement which was broadcasted live on ZIZ Radio on Monday, 2nd March 2015.

“If you are involved or are thinking about getting involved in gang activity, in criminal pursuits, I say to you now, stop…think again…St. Kitts and Nevis is yours. There are opportunities available here for you to steer on a different path,”  Prime Minister Harris emphasized.  “My government has promised that all will have a fair share of the nation’s prosperity. You have an opportunity for a fresh start; to replace your frustrations and anger, with peace, with love, and hope…real hope for a better tomorrow for you and your family under this new Government of National Unity.”

The leader of the federation specifically addressed “at risk youth.”

“I say to you, the most youthful among us, you who make up the largest percentage of our prison population, you who choose to take life, that you did not give life, so it is not yours to take,” the Prime Minister advised.  “Instead you must value life. You must find other means to settle your disputes.”

It was emphasized that the Federation had to be protected against criminal elements.

“This government will implement immediate, enhanced, preventive security measures to ensure the safety and security of our Federation,” the National Security Minister noted.  “This is of utmost importance.  My administration has given a commitment that our police force will have the necessary resources to fight crime and to catch criminals.  The criminal elements in this country must know that they will have no safe haven here.  It is a new day.”

Prime Minister Harris outlined part of the plan to fight crime. “My administration will also provide increased prosecutorial support, and address the tight-lipped ‘no-snitching’ culture that has crept into our society.” He committed to making the “Crime Stoppers” programme more effective and increased consultation with the Organization of the Eastern Caribbean States (OECS) Supreme Court to effect a special court dealing with gun and other violent crimes.

It was stated emphatically that his administration has “a zero tolerance policy towards crime.”

“Crime helps no one and it harms everyone,” Prime Minister Harris underlined.  “Among other things, crime destabilizes neighborhoods, hurts our families and communities, erodes our attractiveness as place where people invest and create jobs and it damages our reputation as a beautiful country of kind, friendly and warm people. Crime will also hurt the criminals because under my administration they will find no comfort.  We will be strong, we will be resolute, and relentless in our efforts to fight crime.  Our people, this country will not be defined by a miniscule, deviant group of people that neither attributes values nor shows respect for human life.”

PM Harris expressed condolences on behalf of the entire nation, to the family of the victim of the latest shooting incident and the families of the other victims of violent crime. The Prime Minister concluded with a word to the criminals.

“You have a fundamental right to life, to liberty and the pursuit of happiness. My government will protect your fundamental right but we will also protect the right of others. What we will not do is allow anyone with criminal intent to rip asunder that which binds us together as a people.  We will give you opportunity, … but we will not allow you to steal the soul of this our beautiful nation.”