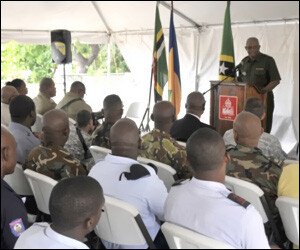 A brief ceremony at Camp Springfield, the home of the St. Kitts – Nevis Defence Force, launched Tradewinds 2015 on Sunday (May 31).  Phase I, of Tradewinds 2015, the maritime phase, will run from today (May 31) through June 09.

The ceremony was attended by representatives from the participating countries and local government officials who heard welcoming remarks from Lt. Colonel Patrick Wallace, Commander of the St. Kitts-Nevis Defence Force.

Commander Wallace, challenged the participating countries to embrace the training, use it as an opportunity to build capacity in their respective agencies, and embrace the challenges and benefits of working with partner nations. He added, Tradewinds is a great opportunity to build lifelong friendships with service members from other countries,â‚¬ and spoke of his personal experiences.

In addition to the Maritime phase, St. Kitts and Nevis’ National Emergency Management Agency (NEMA) will also benefit from training that will test its emergency response mechanisms and the integration of regional disaster management resources with a simulated Humanitarian Response Exercise during the same period.

Over 700 service members from the partner countries namely Antigua and Barbuda, the Bahamas, Barbados, Belize, Dominica, the Dominican Republic, Grenada, Guyana, Haiti, Jamaica, St. Vincent and the Grenadines, Surinam, Trinidad and Tobago, the United Kingdom, Canada, the Netherlands, host country St. Kitts and Nevis and sponsoring country the United States will conduct training that will build capacity in the regional forces to better respond to natural disasters, as well as land and maritime threats that including illicit trafficking.

Upon completion of the Maritime Phase in St. Kitts and Nevis, ground troops from the member countries will proceed to Belize for Phase II, the land based component of the exercise.

Tradewinds 2015 is the 31st  annual hosting of the regional training exercise.