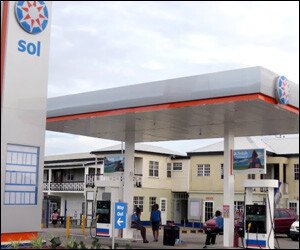 As world oil prices continue to drop, motorists at SOL gas stations in St. Kitts – Nevis continue to pay less for gasoline at the pump.

The Ministry of Finance announced Monday that effective Tuesday 16th December the maximum retail price for unleaded gas at SOL gas stations will be EC$11.60, down EC$1.07 from the previous EC$12.67 for an imperial gallon.

The trigger for Friday’s tumble was a new report from the International Energy Agency on the outlook for the world market in 2015. The Paris-based organization cut its forecast for demand growth next year by 230,000 barrels a day to 900,000 b/d. That will mean that the planet is “only” burning an average of 93.3 million b/d next year, up from 92.4 million this year.

On Friday the price of benchmark crude oil dropped to new five-year lows.

The price of oil has been plummeting for months, leaving oil-producing nations around the world aghast at their sinking revenues. Poor global economic growth has cut demand, while the U.S. is producing oil faster than ever recorded.

Prices fell further last month after Saudi Arabia and its Gulf allies blocked an effort at the Organization of Petroleum Exporting Countries to reduce production levels in order to boost the price of oil.

The OPEC episode shows that it’s not only economists and oil barons who are concerned about the price crash. Many major oil producers are embroiled in domestic and international political crises, and political analysts are watching closely to see how these countries react as revenues continue to decline. Iran, struggling to balance its budget amid falling prices and international sanctions, this week blamed longtime rival Saudi Arabia for a “conspiracy against the interests of the region.” Russia recently warned that it will fall into recession in 2015.

The dramatic decline in oil prices will cost Ottawa about $5 billion in lost revenue and provincial economies a little more than that, one of Canada’s biggest banks suggested Tuesday.