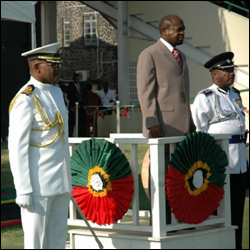 Prime Minister Douglas, who is also the Minister of National Security, will be accompanied by the Commander of the St. Kitts-Nevis Defence Force, Colonel Patrick Wallace and Regional Security Co-ordinator at the Barbados-based Regional Security System (RSS), Mr. Grantley S. Watson. The meeting will be held in Banff, Alberta, Canada.

The CDMA is an important meeting of the defence sector in the American continent and is the biennial forum where defence ministers of the American continent gather to discuss civil-military cooperation, international drug and arms trafficking, terrorism, and transnational organized crime a variety of important defence and security issues to foster mutual knowledge, analysis, debate, and exchange of ideas and experiences.  Participation of the armed forces and security forces in the area of assistance during natural disasters will also be discussed.

While in Canada, Prime Minister Douglas is expected to hold bilateral talks with representatives of Canada and other friendly nations on continuing assistance to St. Kitts and Nevis for the local security forces.

The first Conference of Defence Ministers of the Americas (CDMA) was held in 1995. It was created to provide defence ministers with a forum to discuss such things as confidence – and security-building measures and peace support operations.