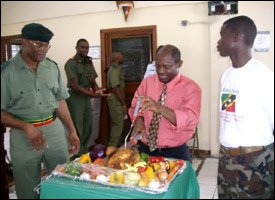 St. Kitts and Nevis Prime Minister and Minister of National Security is calling on the Federation’s Security Forces to get tougher on crime.

Speaking at the Annual Luncheon of the St. Kitts -Nevis Defence Force, Dr. Douglas declared that those who challenge the integrity of the twin-island Federation “must be confronted as if we are in a state of war. Those who continue to terrorise our citizens, residents and visitors must be held accountable for their reprehensible acts.”

Dr. Douglas, who recently assumed responsibility for the portfolio of National Security, said that the present increase in homicides caused by an apparent proliferation of guns and gangs in certain areas in this country is a major concern.

“This unfortunate development is seemingly creating a sense of fear and apprehension in the minds of our people.  I therefore challenge you to confront this spiraling increase in violence and gun related crimes as an attack on your own capability to effectively sustain peace in our various communities,” said Prime Minister Douglas, who later carved the baked turkey and served the soldiers during the sumptuous luncheon.

He called on the St. Kitts-Nevis Defence Force to draw on their maritime and land-based training to successfully implement their plans and action.

“You have all been trained to curb the senseless lack of respect for human life and to quell the open warfare that is being waged among rivaling gangs,” said Prime Minister Douglas.

As Minister of National Security, the St. Kitts and Nevis leader urged the soldiers to continue to unite, especially with their colleagues in the Royal St. Christopher and Nevis Police Force and the Customs Department and take action to stamp out this scourge of gangsterism that is foreign to the Federation’s culture.

Dr. Douglas commended the men and women of the Coast Guard who comprise the Maritime Division of the Force.

“We lament the challenges posed by our porous borders and the deficiencies of our maritime capabilities and resources as small economies. Nonetheless, with our interoperability and strong alliance with regional and international partners we will continue to reduce the illegal criminal activities that are presently in our waters,” said Dr. Douglas, who called for vigilance “for there are those who would continue to smuggle guns into our country and would stop at nothing, including arming our young men, thus causing them to use brute force in resolving their petty conflicts and differences.”

“You must remain focused and loyal to your charge. Those who challenge the integrity of this our fair land must be confronted as if we are in a state of war. Those who continue to terrorise our citizens, residents and visitors must be held accountable for their reprehensible acts,” said Prime Minister Douglas, adding: “This is not the time to be distracted or to lose the commitment to the cause that inspired you to enlist in the St. Kitts-Nevis Defence Force. This is not the time to lower your standards for ill-gotten gains!”

He called on the Defence Force Commander, the rank and file to join with other colleague professional agencies to mobilise fully for action not only during this carnival season but through the year 2009.

Prime Minister Douglas noted that from the recent consultation on crime with stakeholders two weeks ago, the Ministry got clear indication that there are members of civil society who are supportive of the Security Forces and who are willing at all times to play their part at the community level.

“The time for action is now! Let us all work together to achieve the common good”¦that is the safety of our people and our blessed nation. It is in unity that we will be strengthened,” said Dr. Douglas.