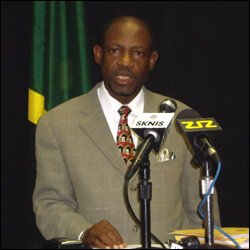 “It has made me to become much more committed to the cause I have set, given the mandate of the people. It has caused me to become more focused. It has caused our own people, our own supporters to recognise that unity is strength and it is through a party, that is united that will bring the fourth consecutive defeat to the People’s Action Movement and any other party that has stood in our way in recent times,” said Prime Minister Douglas in responding to a question at his recent press conference on how the comments by the former Cabinet has affected his leadership of the St. Kitts – Nevis Labour Party and the Government.

Labeling the call by Mr. Astaphan for him to step down as Prime Minister and as National Political Leader of the St. Kitts-Nevis Labour Party as an “unnecessary distraction,” Prime Minister Douglas said Mr. Astaphan “has no support in that cause.”

Dr. Douglas said he has become “much more vigilant, and steadfast in pursuing the goal that has been set to a large extent by the people of St. Kitts and Nevis and that is to get on with the business of transitioning successfully out of sugar, get on with the business of transforming our economy and making sure that it is rooted into a sector that can provide opportunities for development for our people.”

“It has caused me to become more steadfast in the empowerment programme that was recently launched and which we continue to pursue over the years,” said Dr. Douglas.