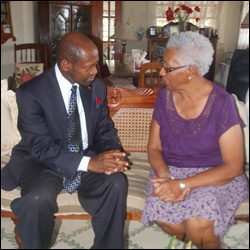 Prime Minister of the Federation of St. Kitts and Nevis, the Rt. Hon. Dr. Denzil L. Douglas personally expressed his condolences to Mrs. Sheila Daniel, widow of the Dr. Simeon Daniel at the family home on Friday.

Prime Minister Douglas, who was accompanied by the Premier of Nevis, the Hon. Joseph Parry, expressed his personal sympathy and that of his Cabinet and the Federation on the passing of Dr. Daniel.

Dr. Douglas briefly recalled the contribution of Dr. Daniel, not only to Nevis, but also to St. Kitts and Nevis and gave the assurance that the Federal Government will provide all that is required and necessary in accordance with the wishes of Dr. Daniel and the family.

He informed Mrs. Daniel that the Federal Government will be represented at the Official Funeral on Tuesday 5th June.

During the short period, Mrs. Daniel spoke of how she came to marry the popular barrister and politician for 35 years.