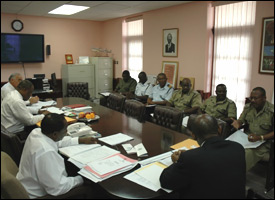 In their editorial for today (Wednesday) entitled “Who should lead the fight,” Sun St. Kitts/Nevis and the Antigua Sun said other Caribbean leaders need to jump into the trenches and lead from the front like Prime Minister Douglas.

Both papers noted that in several Caribbean jurisdictions, the responsibility of keeping the criminals at bay has been placed in the trust of several people and this appears to be adequate once crime is being kept under control.

“But when criminal activity becomes the order of the day, no other public servant will be expected to hold the reins of responsibility but the chief servant ““ in our jurisdiction the prime minister,” said Sun St. Kitts/Nevis and the Antigua Sun, adding: “This is why in our estimation, Prime Minister of St. Kitts/Nevis, Dr. Denzil Douglas, made the right move to take control of the national security portfolio following the resignation of Dwyer Astaphan.”

“We would want to suggest that the prime minister of Antigua and Barbuda (Hon. Baldwin Spencer) might not be too far away from assuming a similar role, understanding that the situation now calls for his close attention and that none can be expected to bring things back to order but he, since so many citizens of the country had put their faith in him to lead them in several ways,” said the editorial.

Both independent newspapers quoted Prime Minister Douglas in an interview in which he said that in the new configuration of ministerial portfolios, he has sought to give heavy focus on the issues of highest national priority including law and order and the public finances.

“In particular, I am of the view that the issue of crime is an urgent priority that requires continuous attention at the highest policy level.  I share the view of the Dwyer Astaphan that crime is a cross cutting issue that requires policy interventions spanning numerous governmental activities including social, community and youth development, growth and employment, education, and law enforcement,” the Sun quotes Prime Minister Douglas as saying.

Sun St. Kitts/Nevis and the Antigua Sun noted that this translates into the person at the helm recognising a bad situation and taking responsibility to deal with the matter something other leaders can draw from.

“Those around the OECS especially who know their respective countries are being plagued by rising crime, cannot wait for others to get the job done, but need to jump into the trenches and lead from the front like Dr. Douglas,” said the editorials, adding that Prime Minister Douglas seems prepared to do so in order to effect meaningful and positive change as far as keeping crime under control in his country is concerned.

The papers noted that crime-fighting seems to have been left totally for the security forces to deal with while the ordinary citizen chooses to stay in the background whenever matters of a criminal nature arise.

“We too have maintained that the security forces cannot effectively fight crime on their own but will depend instead on as much support available from the members of the public. We understand, however, that the police service is not what it once was and that people do not seem to have the faith and trust in its officers.

This has always been necessary for them to readily come forward in way of support, whether it is in way of offering information relevant to a crime committed or anything related to keeping the members of the public safe.

It has reached a very sad state indeed and as we continue to see the rise in violent crime it makes us wonder where the good, old, safe days have so quickly disappeared to. When times like these present themselves people look toward the country’s leadership for answers and results and generally will not accept anything less,” said Sun St. Kitts/Nevis and the Antigua Sun editorials.