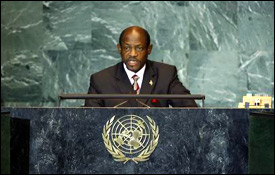 St. Kitts and Nevis Prime Minister and Minister of Foreign Affiars, Hon. Dr. Denzil L. Douglas said Thursday that the twin-island Federation which became an independent nation some 25 year ago has achieved much despite a multitude of problems.

Addressing the 63rd Regular Session of the United Nations General Assembly, Prime Minister Douglas said that the St. Kitts and Nevis experience demonstrates that good governance and prudent management of one’s resources; appropriate investment in people and systems, protecting people’s freedom of association, religion, and speech; the support and facilitation of a free and vibrant press; success at advancing the socio-economic well-being of one’s people; and the upholding of democratic ideals, are determined not by land mass, but by national character and political commitment.

“They are the result, not of demographic or geographic size, but of long-standing socio-cultural traditions. They are a function, not of GDP, but of an entrenched ethos of striving and determination. Our faith has steadied our resolve and belief in ourselves and our future. And of course, along the way, we have relied understandably on institutions such as our beloved United Nations,” he said.

Prime Minister Douglas pointed out that through its United Nations membership, St. Kitts and Nevis has built important and strategic partnerships and stood shoulder to shoulder with other member states to protect its individual rights and collective freedoms and have fought battles far bigger than the expectation for a country of its size.

“We have also been witnesses, Mr. President, to the positives and negatives, the strengths and failings of our world, but have soldiered on together in common cause. And that is why, Mr. President, that twenty-five years later, I remain optimistic about the progress of the United Nations and its ability to defend the poor and needy despite the pull of competing powerful national agendas that has occasionally risked undermining the ethos of the institution, and indeed the common good,” he told the World Body.

Dr. Douglas said he has come to appreciate the achievements made by St. Kitts and Nevis as well as to appreciate that even at this juncture, providence affords new opportunities to renew the cherished institution.

He said that it was very easy to take side with the cynics when the Security Council becomes frozen in stalemate or when the need for action fall victim to political posturing. “But the history, particularly of the past two decades, instructs me that the United Nations is far more than the sum of its weakness. Because for millions of people around the world this organization is their only hope ““ a bridge between life and death – a bastion of freedom and a beacon of hope.”

“It is my hope, therefore, that in this “Assembly of Frankness” there will be a sober and unrelenting analysis of the human consequences of sweeping and globally-enforced trade and economic regimes, on small states all across the globe. And it is also my hope that the economic uncertainties now being experienced in some of the world’s larger economies will sensitize us all to the breadth of the uncertainty, the depth of the anxiety, and the real psychological trauma that often grip small states when policies that are formulated far beyond their shores, and are utterly unresponsive to their entreaties, are nonetheless thrust unflinchingly upon them,” said Prime Minister Douglas.

“But yet again as in the case of climate change we are victims of the act of others with no resources to combat the consequences,” said Prime Minister Douglas.

He said that earlier this year, he participated in the high-level conference on World Food Security and the upbeat response from several Heads of State and Government and from the numerous ministers of agriculture, forestry, fisheries, water, energy and environment who participated in that meeting was a strong indication of the relevance and timeliness of the conference for nations seeking to take positive action on the issue of food security.

“The current trend continues to have a lopsided impact on the poor, and the increasing numbers of extremely poor and vulnerable people, who are least able to counter the impact of economic dislocations facing our countries. Mindful of our personal responsibility as leaders and of the heightened expectations of our citizenry, the government of St. Kitts and Nevis has been taking practical measures to alleviate the suffering on our resilient people,” said Dr. Douglas.

He said his Government addressed the important dimensions of availability and access to certain food staples such as rice, flour and sugar. “We have looked at how best to stabilize prices to inject predictability into the system without prejudice to free market economics. We have also begun to rationalize and promote proper utilization of agricultural lands through land use diversion and diversification; providing financial and seedling support to farmers; and recommending water rationalization and enhanced irrigation techniques,” said Prime Minister Douglas.

He said that the problems he alluded to are not unique to St. Kitts and Nevis. “You will recall popular riots in some countries including Haiti which led to the resignation of that country’s government. This is evidence of just how the impact of the rising cost of food and the despair visited upon whole communities could easily undermine peoples’ faith in their governments to deliver on the promises of democracy, free market economics and globalization,” said Prime Minister Douglas, adding that the dramatic increase in cereals and dairy products by nearly 70 percent, vegetable oils by 85 percent and maize, wheat, rice and beans by more than 100 percent, has created the worst food crisis in recent years.

“This new phenomenon, Mr. President, will make it more difficult for us to address the growing incidence of poverty in and among our nations and our ability to achieve the Millennium Development Goal of halving extreme poverty and hunger throughout the world by 2015,” said the St. Kitts and Nevis leader.