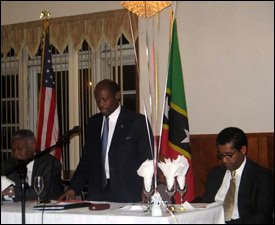 Prime Minister Douglas spoke of the progress that the twin-island Federation has made over the past 25 years and said the country was moving in the right direction politically, socially and economically.

Dr. Douglas who was in New York for the 63rd Session on the United Nations General Assembly spoke of the several events he had been attending.

He told the large crowd on Saturday 27th September that his St. Kitts – Nevis Labour Party Government is determined to keep its promise and adhere to the wishes of the nationals in the disapora that they will not be disenfranchised and excluded from the electoral reform process.

Dr. Douglas received a thunderous round of applause when he restated that as long as nationals whose names are on the current Voters List and confirm their registration, their names will appear on the new voters list and retain the right to vote in general elections. He added that persons who did not confirm will have to register at the electoral office in St. Kitts or in Nevis.

It was the first Town hall meeting held in Brooklyn and Prime Minister Douglas thanked nationals who reside in Brooklyn, especially those who journeyed from The Bronx and other areas of New York to attend the meeting, which was chaired by St. Kitts and Nevis’ Permanent Representative to the United Nations, His Excellency Mr. Delano Bart, Q.C.

The Federation’s Ambassador to the United States, His Excellency Dr. Izben C. Williams welcomed nationals, while the Pastor of the Beular Church said prayers in celebrations of the 25th Anniversary of Independence. The Church’s Junior Choir also rendered two soul stirring selections.