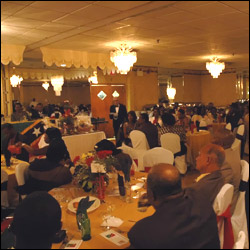 “This is a gargantuan task, one that will require all our involvement, and in this struggle, women will have a very special part to play because of the special skills, the special wisdom, the unique spiritual strength with which the Universe clearly imbued the women of this earth,” Dr. Douglas told nearly 250 persons attending the annual Mother’s Day Gala organised by Kittitians and Nevisians Association (KANA) in New York on Sunday and held under his distinguished patronage.

Pointing out that the Caribbean, St. Kitts and Nevis and the World are at a cross-road, Dr. Douglas said there is something about the way that human beings have been interacting, behaving and relating all around the world that have not created the best results that are needed.

“There is something about the way young people are being raised that is not quite right.  And so, in London, in New York, in Brussels, in the Caribbean, and all over the world, young people are showing the signs of emotional and spiritual distress. Not each and every one of them, of course,” said Prime Minister Douglas, adding: “In St. Kitts and Nevis and throughout the Caribbean we have countless young people for whom life seems a straight and highly manageable road.  But there is no denying that, globally, there are more young people in crisis today than ever before.”

He said that although one cannot see inside young people’s hearts, one can see their behaviour.

“And the behaviour that is causing greatest concern all over the world falls under the headings “violence” and “crime”.  But “crime”, I insist, is really the symptom of something far, far deeper.  And because of this, it is now the duty – the pressing, urgent, inescapable duty – of adults all over the world to courageously identify and bravely root out those factors and influences that are changing our children, changing our societies, and, in the process, changing the Caribbean and the world,” said Dr. Douglas.

He said there is no denying the tremendous role that women, in general, and mothers, in particular and have played since time immemorial in shaping the world.  “But as we ready ourselves to fill the tremendous spiritual and emotional void in which so many of the world’s young seem to have become trapped, we cannot leave it all to the women and the mothers.  They, as I have said, have a unique and special role but, but each and every one of us also needs to jump in ““ now – and do our part,” the St. Kitts and Nevis leader admonished.

“If we, as a community, a nation, and a region, are to help the mothers and help our youth”¦”¦if we have any hope of conquering that which has caused us all such pain and move forward in a spirit of hope and unity, we must ask ourselves, what places a human being in the type of emotional state that permits him or her, or indeed propels him or her, to shoot, or stab, or inflict extreme pain and trauma on another human being?,” he asked.

“As we grapple with this question, let me suggest that we look not only at the young people of the world”¦”¦or the Caribbean”¦”¦”¦.or St. Kitts & Nevis, but at ourselves as adults, teachers, parents, neighbours, religious leaders, as politicians, songwriters and as commentators.  And we must all identify ways in which we can ““ and must ““ do better,” said Prime Minister Douglas.

“There is behaviour that can be public, and then there is behaviour that must be private.  In recent years, however, the lines between the two have gotten completely confused and blurred ““ with serious, far-reaching consequences for the types of society in which we end up living. We see this failure to distinguish between public and private behavior during festivals and other celebrations, we see it on our television screens, and too many have come to accept it as normal.  Even if we are not personally involved in these behaviours, however, we all pay a price for this.  We pay a price because this kind of waywardness has tremendous and far-reaching implications regarding the kind of society in which we end up living,” said Dr. Douglas.

“I guarantee you that we will win the acceptance of and admiration for these proud standards, far beyond our shores. The time has come for us, as a people, to wisely and lovingly shape our own “˜culture’. Our survival as a self-respecting people depends on it,” Prime Minister Douglas told the audience at the Eastwood Manor in the Bronx.

He said that the people of the Caribbean, and in St. Kitts and Nevis, are a people with an inspiring history of struggle, perseverance, and triumph and have a lot to teach and tell the world.

“Ours (St. Kitts and Nevis) is a story that would fill anyone with pride. The United Nations Human Development Index attests to our accomplishments in the areas of education, healthcare, and general welfare.  However, we must also be vigilant in honoring our history and our culture.  We must not allow anyone, through the encouragement of certain behaviours in public, to trample on that story.  Most importantly, neither should we ourselves do that. God, they said, could not be everywhere, so he made mothers.  And that is why we will count so heavily on the strength, the spirit, and the vision of our region’s mothers as we continue along this path of self-assertion”¦”¦”¦.as we reclaim and assert our traditional culture of joy with dignity,” said Prime Minister Douglas.