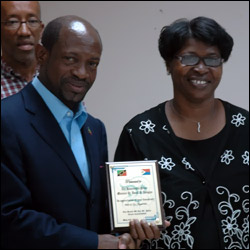 Scores of Kittitians and Nevisians living in St. Maarten were told last Friday night by the Federation’s Prime Minister Hon. Dr. Denzil L. Douglas that the country was changing dramatically for the better through its major emphasis on Hospitality and Tourism development, implemented by his governing St. Kitts – Nevis Labour Party.

Dr. Douglas pointed to the meeting, organised by St. Kitts and Nevis Association of St. Maarten that in the continuous efforts to transform the national economy emphasis was also being placed on social development, information technology, electoral reform, political changes and developing sports tourism.

Following is the report carried in the St. Maarten Herald of last Saturday.

Dr. Douglas said much emphasis was also being placed on helping the former employees of the sugar industry, which was closed down in 2005, to become qualified for other means of employment and helping them to improve their living arrangements.

Dr. Douglas noted that although his government was being accused by the opposition of ill-treating the former sugar industry workers, by his observation St. Kitts and Nevis was doing a better job than many of the other countries in the region that had to close down their sugar industries.

Prime Minister Douglas mentioned some benefits for these former employees in terms of housing. For example, for former employees who did not own homes prior to the closing down of the sugar industry his government has secured money to provide free housing with the agreement that the landowner pays only for the land.

Employees who had homes prior to the closing down, but need to expand their homes due to an increase in the size of their families, are entitled to access the reserved money to assist in adjustments to their homes.

In addition to the distribution of housing and land, young people and low income families of the country are being given the opportunity to purchase land at subsidised prices and some 500 houses are currently under construction to facilitate low income families.

He also spoke about the development of a new technical secondary school, which aims to be one of the most modern of its kind in the region.

And, in the area of Information Technology, investments were being made in the setting up of computer labs in all primary schools and in the development of a computer networking centre with the intention of transforming the government into an e-government. This will give the people the option to access important government documents online and to pay bills online.

The country’s health care system was also being upgraded to include more advanced treatment facilities. Recently implemented was the right of any aged person suffering with a chronic illness to be treated in the medical facilities free of charge.

And, in addressing the issue of changes in the federation’s electoral system, the Prime Minister explained that to lessen the chances of fraud during voting at election time, people of the country are being asked to re-register on the voting list by means of confirmation.

Local Kittitians and Nevisians will be informed shortly about the arrival of the machinery for the new electoral system, whereby they will be able to visit a location on the island to confirm their interest in voting in the next election. Persons residing in St. Kitts and Nevis will have to visit the registration offices to confirm.

However, first time voters, including the children of Kittitians and Nevisians born abroad, will have to visit the registration offices on the islands to register to vote. They cannot use the new machinery.

In addition, with the implementation of showing an identification card when going to vote and linking the voting registry to the civil registry, the risk of having persons vote using the names of deceased persons whose names have not yet been removed from the registry will be avoided.

Referring to Hospitality and Tourism development as the main focus for the country, Douglas said efforts were being made to develop tourism in both the South and North sides of the island to ensure equality and even distribution of employment and housing in both the countryside and town.