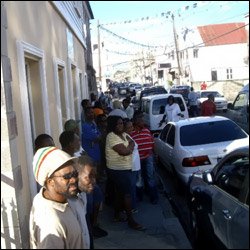 St. Kitts and Nevis Prime Minister Hon. Dr. Denzil L. Douglas said Friday afternoon his Government “has no comfort” in carrying out the sentence of the Court following Friday morning’s execution of  40-year-old Charles Elroy Laplace for the 2004 murder of his wife, Diana Laplace.

“Another life taken. It is a human life, but we have to be certain that there is a deterrent among our people in taking another man’s life. We have a resolve to deal with the issue of crime and violence in this country,” said Prime Minister Douglas in the National Assembly during debate of the 2009 Budget for the Federation of St. Kitts and Nevis.

Dr. Douglas said that carrying out an order of execution is not the only way of demonstrating political will, as there are other aspects of showing the political will have been well demonstrated.

Prime Minister Douglas made the comment after officially informing the House that the “convict Charles Elroy Laplace (aka Al Laplace) was today executed at Her Majesty’s Prison in accordance with the Laws of the Federation of Saint Christopher and Nevis.”

“Charles Elroy Laplace, the Nation will recall was charged with murder of his wife Diana Laplace on the 12th February 2004. He was later tried at the High Court (Criminal Assizes) and convicted on 28th February 2006 and sentenced to death on 30th March 2006,” said Prime Minister Douglas.

Dr. Douglas, who is also Minister of National Security, disclosed that a Notice of Appeal was later filed with the Court of Appeal but was dismissed on the 29th October 2008 for being filed out of time.

“There was no further Application or Appeal in this matter (therefore no Pending Application or Hearing or Restraining Order in respect of this matter. In accordance with the Constitution of the Federation of Saint Christopher and Nevis, the meeting of the Advisory Committee of the Prerogative of Mercy was convened and advised the carrying out of the sentence of the aforementioned Court made on the 30th March 2006,” said Prime Minister Douglas.

“The Order was duly made for his execution today Friday 19th December 2008 and was carried out this morning at Her Majesty’s Prison,” said Prime Minister Douglas. The statement was to be read by Attorney General and Minister of Justice and Legal Affairs, but the Budget Debate was continuing well past mid-afternoon.

Friday’s hanging was the first in 10 years. In 1998, David Wilson, aged 28, was hanged for killing a security guard at a hotel four years earlier. One man was hanged in 1981.