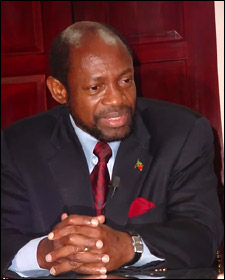 St. Kitts and Nevis Prime Minister Hon. Dr. Denzil L. Douglas is expected to tell the Summit on World Food Security that he hopes their deliberations will address the many food security issues that has arisen as a result of soaring food prices and food shortages.

In his address to the Summit, Prime Minister Douglas is expected to point out that the dramatic increases in food prices within recent months are worsening the living conditions of millions of poor people making it more challenging for them to consume nutritious foods.

Dr. Douglas is expected to call for the urgent development of measures to ensure that the adverse effects of the higher food prices on the poor are minimized and that sustainable measures developed and implemented to reduce poverty.

The Conference at the FAO Headquarters, in Rome, Italy from 3rd to 5th June 2008 will build upon the work initiated at the Expert Meetings and Stakeholder Consultations held between January and April 2008 and recent analysis undertaken by the Organization.

Prime Minister Douglas, the first Caribbean leader to begin efforts to deal with the food crisis and rising cost of food, is accompanied by Minister of Agriculture, Hon. Cedric Liburd.

Prime Minister Douglas is expected to address the gathering between 16:45 and 17:00 local time on Tuesday.