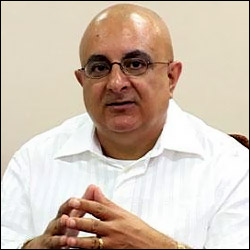 St. Kitts and Nevis Prime Minister Hon. Dr. Denzil L. Douglas has issued instructions to his Attorneys at Law and Counsel to take whatever lawful action permitted under the law against Political Leader, Mr. Lindsay Grant and his party’s mouthpiece, The Democrat newspaper “to ensure that Mr. Grant and the Democrat are made to pay for their reckless and irresponsible allegations and conduct.”

A statement from Dr. Douglas’ attorney, Senior Counsel Mr. Anthony Astaphan of Dominica on Wednesday noted what he describes as “a very disturbing trend taking place in the OECS.”

“In recent times, Political Parties in Opposition have fabricated strategies of ambush and destruction directed at sitting Prime Ministers. These strategies and their implementation are known as weapons of mass deception. The politically crafted weapons of mass deception are designed to destroy the reputations of Political Leaders and Prime Ministers. Opposition Parties have been advised that that is the only way for them to win an election,” said Astaphan, a prominent Caribbean lawyer.

Mr. Astaphan further noted that in St. Lucia, the United Workers Party sought to paint then Prime Minister Dr. Kenny Anthony with the outrageous and false allegation of corruption.

According to Mr. Astaphan, Mr. Lindsay Grant and the People’s Action Movement have joined the campaign and fabricated weapons of mass deception directed at the Honourable Prime Minister of St. Christopher and Nevis Dr. Denzil Douglas.

“They have in the Democrat and on Voice of Change 6 deliberately and falsely accused Dr. Douglas of corruption with regard to the rental of property owned by him to the Embassy of Taiwan and of the corrupt use of the office of Prime Minister to improperly accumulate specific Crown and other lands. These allegations are nothing more than part of an engineered political strategy calculated to discredit the Prime Minister and Political Leader of the St. Christopher & Nevis Labour Party,” said Astaphan in the statement.

He said the allegation that Dr. Douglas acted corruptly in the rental of his property to Taiwan, is “false and defamatory.”

“There was and is no corruption, misfeasance or illegality in the rental of private property by a Prime Minister to a foreign Embassy or Government. There is no rule or law whatsoever in the Federation of St. Christopher and Nevis which prevents or prohibits any elected Minister or Prime Minister from conducting private business while in public office. It matters not that a foreign state is involved,” said Senior Counsel Astaphan.

“Further, corruption, misfeasance or illegality requires (i) improper use of public office and property of the Crown and (ii) a dishonest and corrupt intent. At no time and under no circumstances in the relation to the rental of his property to the Embassy of Taiwan did Dr. Denzil Douglas use his office improperly or otherwise or have a dishonest intent. Indeed, when one reads the allegation being made, it is in vague, emotional and pejorative terms,” said Astaphan in the statement.

He added that the Prime Minister owns property and shares in some companies. But the allegation that he corruptly used the office of Prime Minister to acquire Crown or other lands is, for a number of reasons, “manifestly false and defamatory.”

“First, Dr. Douglas does not own all of the properties as alleged by Lindsay Grant in Voice of Change 6. Second, Dr. Douglas acquired a number of the properties identified by Mr. Grant prior to becoming Prime Minister in 1995. These properties were acquired from private individuals by means of loans and mortgages from various banking institutions. He also acquired the majority of his shareholding prior to 1995. Third, after becoming Prime Minister Dr. Denzil Douglas continued, like any other citizen of the Federation, to acquire properties from private individuals. One lot was acquired from the Frigate Bay Development Corporation in the normal course of business and at the going market price. All of the properties acquired after 1995 were acquired by means of loans and mortgages secured by titles, and, most if not all are being repaid by the rent gathered from a number of properties under business plans presented to the various banks. The monthly rent payable to Dr. Denzil Douglas exceeds his monthly obligations to the banks and financial institutions.  Fourth, Dr. Douglas never used the office of Prime Minister to acquire and has not acquired Crown lands from Central Government whether corruptly or otherwise.  More particularly Dr. Douglas has not acquired any Crown land since becoming Minister responsible for Lands in 2004,” said the statement.

It stated that Dr. Douglas has decided that this salacious, scandalous and naked political attack on his reputation as Prime Minister by Mr. Lindsay Grant and the People’s Action Movement ““ owned Democrat newspaper cannot remain unanswered and has therefore instructed his Attorneys at Law and Counsel to take whatever lawful action is permitted under the law to ensure that Mr. Grant and the Democrat are made to pay for their reckless and irresponsible allegations and conduct.