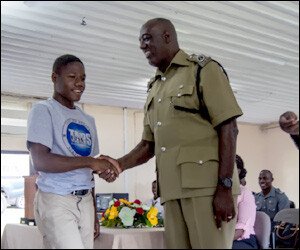 Fifteen year old Jokeem Abbott and his schoolmate Shavaughn Wilson, 16, bore witness to the usefulness of the Teen and Police Service (TAPS) Academy which has instilled positivity and encouraged behavioral change in their lives.

The young men were members of the first class of local students to graduate from TAPS after it was introduced to their school, Verchild’s High, in September last year.

“It was good,” a shy Abbott said about the programme, after receiving his certificate moments earlier at Thursday’s (Jan. 22) graduation ceremony. It was an occasion he was able to share with his mother who was present to support her son. Wilson agreed and said he was now better prepared to deal with challenges he has faced in the past, challenges that resulted in his selection for intervention by law enforcement.

TAPS instructor Constable Mark Handley said he and his colleague Woman Police Constable Andrea Battice are committed to the programme and were proud to see six of the young men they worked with graduate. “This milestone does not stop here. We at the TAPS will continue assisting all of you and those who want to get into the programme in the future,” Handley promised.

Principal of the Verchild’s High School (VHS), Mary Clarke, explained that she was proud of the collaboration with the Royal St. Christopher and Nevis Police Force (RSCNPF).

“Intervention in the form of prevention that the TAPS programme offers is embraced wholeheartedly,” she stressed. “The school, with the involvement of the Guiding and Counseling Department, was more than willing to facilitate this programme.” The principal saluted the instructors, school faculty and parents for signing on to the initiative. She also congratulated the students, who she revealed, first “balked at the idea of staying behind after classes for the 11-week course.”

TAPS Director Superintendent Rosemarie Isles Roberts stressed that she was proud to “lead a group of enthusiastic police officers” that provide “positive alternatives from a hands on perspective. This is the first of many graduations which will include all of the high schools in St. Kitts and Nevis. We are thankful for the assistance, advice and guidance received from Prime Minister the Right Honourable Dr. Denzil Douglas and the Anti Crime Unit, Commissioner of Police, Celvin G. Walwyn, Chief Education Officer, Clarice Cotton and VHS Principal Clarke ““ who insisted that this programme was a must for this school.”

Superintendent Isles Roberts encouraged the participants to “continue moving forward positively. Never, ever give up and never turn back,” she urged.

Abbott and Wilson were joined by Latrell Richardson, Douval Clarke, T’Shawn Grant and Marlos Gumbs in completing the course.