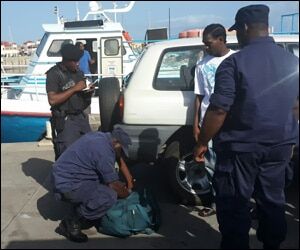 Graduates of the Investigative Interview Course 1/2016 held from February 01 to 12 at the Police Training Complex have been challenged to make a meaningful difference in reducing crime in St. Kitts and Nevis.

Permanent Secretary in the Ministry of National Security, Osmond Petty, told the 14 police officers and two officers of Her Majesty’s Customs and Excise Department that an important facet of the Crime Directorate of the Royal St. Christopher and Nevis Police Force is to increase the solvency rate of homicides and violent crimes by at least 15 percent by 2019.

“Where do you fit there, because we expect you to assist in [improving] that solvency rate?” he questioned. “We expect all of the persons who have had training in investigation to move towards that solvency rate.”

Mr. Petty added that participants should be able to identify problems earlier and create a list of potential suspects. There’s also an expectation for an increase in the number and quality of actionable intelligence packages on crime. To gain the additional intelligence, the permanent secretary said all persons interviewed by the Criminal Investigations Department (CID) and those arrested for crimes should be subject to intelligence interviews. Persons who have served their time and are leaving the prison system should also be subjected to exit intelligence interviews he suggested.

Permanent Secretary Petty pledged Government’s commitment to empower the men and women of the police force and said in return they are looking for the officers to add value to the procedures and processes in the agency.