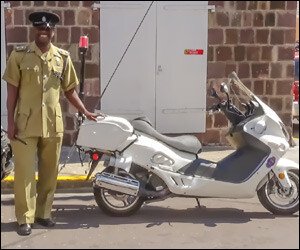 “Challenging but well worth the effort.”

That’s how Inspector Alrick Edwards of the Royal St. Christopher and Nevis Police Force describes his time in the Republic of China (Taiwan) as he pursues a Bachelor’s Degree from the Central Police University (CPU) in Taoyuan City. Edwards left St. Kitts and Nevis eighteen months ago to study Police Administration.

The Bachelor’s course is a four year programme, but Inspector Edwards had to spend his first year learning Mandarin Chinese at the Ming Chuan University. He successfully completed the language study, and is currently home on break after wrapping up his first semester.

“I covered topics like sociology, judo, introduction to criminal law, constitution, introduction to jurisprudence, drills and a few others,” he stated. However, his studies at the CPU carry historical weight as Inspector Edwards is the first person from the Caribbean to attend the University.

“I am really overwhelmed,” he said. “When I found out that I was the first person to attend the Central Police University I had mixed feelings. … I felt really, really good because if I perform to the best of my ability and I’m successful then it will set a good example for others. If I fail, then it may affect future admissions from St. Kitts and Nevis or the region so it is a lot of pressure but I am up for the challenge.”

During the difficult moments, Inspector Edwards said he looks to his 9-year-old son LeBron for inspiration.

“I see my son smiling and he being happy and feeling proud of his father is my motivation to work hard.” The goal of being Commissioner of Police one day was also highlighted as a driving force for success.

Inspector Edwards explained that he was impressed with the push from the current Commissioner Celvin G. Walwyn to expose the men and women to various training opportunities as well as to pursue higher academic qualifications.

In the meantime, the police inspector is looking forward to going back to school next week where he will continue to learn new things about the Chinese language and culture. He urged locals to take advantage of scholarship opportunities to study in Taiwan and also to learn Mandarin which is taught locally.