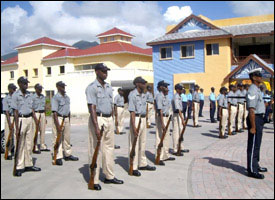 Telephone and other communication operators from the Telecom Unit of the Royal St. Christopher and Nevis Police Force are now better equipped to respond to the calls of the public as a result of customer service training being held this week at the Police Training Complex.

The three-day training session which runs from Monday, January 30 to Wednesday, February 01, 2012, reinforces Police Commissioner C.G. Walwyn’s commitment to restoring positive communication between the police and the public and raising all aspects of police operations to the highest level of professionalism.

According to training facilitator Mrs Hazel Ross-Robinson, when persons in St. Kitts and Nevis are in distress and call “˜911,’ they hear the voices of the Telecom Unit as their first contact with the police. The establishment therefore wants to make Telecom operators aware of the importance of what they do.

“The Commissioner therefore wants to ensure that those who work in that department are keenly aware of the importance of their services to the nation, and that they respond in a manner that’s professional, and in a manner that avoid the type of crisis that usually result if there is inadequate responses and follow-up” said Mrs Ross-Robinson.

The main objective of the training, explained the facilitator, is to impress upon Telecom workers that the people who reach out to them are usually in distress and need help urgently and efficiently.

“What I’m trying to do is to impress upon the people who work in the Telecom department the fact that when people reach out to them they’re usually in a panic, they’re usually in distress because there’s a fire, there’s a burglary, there is a violent act, and those people are in distress, and they need help,” Mrs Ross-Robinson said.

Mrs Ross-Robinson said this is not the first time that the Royal St. Christopher and Nevis Police Force has afforded its communication professionals this type of training, but, as a result of the dynamic evolution of the police force, has found it necessary at this time to repeat this type of training to keep Telecom workers at the top of their “game”.

“Well this training has taken place before, but that was some time ago. People get transferred, people move on to other positions, new people come on staff, and so they need to, as well, be upgraded in terms of their skills.”

Police Officers too have been receiving vast amounts of training as an ongoing process in forensics and other areas of police operations as components of a multifaceted approach to training being undertaken by the police force.