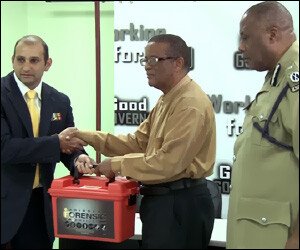 The Royal St. Christopher and Nevis Police Force (RSCNPF) has had its crime-fighting capacity beefed up with the donation of a master of bio-hazard evidence collection forensic kit donated by Amalgamated Security Services Ltd (ASSL) of Trinidad and Tobago.

During a brief ceremony at Government Headquarters in the parliamentary lounge on September 11, Dr. Maurice Aboud, Chief Forensic and Criminal Forensic Officer at ASSL and Lab Director at Caribbean Forensic Services Limited, handed over a crime scene forensic kit to Mr. Osmond Petty, Permanent Secretary in the Ministry of National Security, while Acting Commissioner of Police, Mr. Stafford Liburd, and Public Relations Officer of the RSCNPF witnessed it.

Mr. Aboud said that the gift of the forensic kit arose out of the Association of the Caribbean Commissioners of Police Conference, whereby ASSL has developed into a forensic support programme thereby allowing commissioners of police in each island to specify a forensic kit of their choice in which they see a major need for their particular island.

He said that the RSCNPF selected the master of bio-hazard evidence collection kit, which is a forensic kit designed to allow safe collection and preservation of evidence from biological hazards at crime scenes in order to be able to safely document and collect the evidence so that it can be further processed through the forensic laboratories and ultimately lead to the conviction of a crime.

“I would like to thank Commissioner Liburd for taking us up on this free kit and seeing the value as we try to further build and support our relationship between law enforcement agencies and private security organizations because we are in this together to fight against crime,” Mr. Aboud said. “Whatever we can do to help give back and give the necessary support, we are very happy to do so”¦this forensic kit is an example of us trying to make sure that we build that relationship and provide the local forensic experts with the tools that they need to do their job and do their job in a manner that will ultimately lead to the collection and preservation of evidence.”

In his brief remarks, Commissioner Liburd said “we recognize in this federation that crime fighting will not always be expected in the traditional way of eyewitnesses so we are depending a lot on technology.”

“This kit will assist the Forensic Division in the Royal St. Christopher and Nevis Police Force. Just recently, the Government has given us the old magistrate’s court which is being utilized and transformed into a totally new area of the police force where we are developing forensic because the use of it is important for us to solve cases,” Commissioner Liburd said. “We continue to search in other regions in the Caribbean and (this gift today) demonstrates that we are hoping that we can work closely with Amalgamated Security Services Ltd in advancing our crime-fighting techniques.”

Grateful for the donation, Commissioner Liburd said “I support this gift. I intend to ensure that we utilize it well and we expect that whatever happens to us, we can say this was a positive contribution to the Royal St. Christopher and Nevis Police Force.”