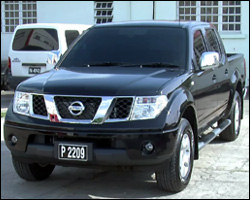 On Monday, the St. Kitts and Nevis Police Force received a new tool to utilize in ongoing efforts to reduce crime, in particular, illegal narcotics.

Director of the Narcotics Affairs Section of the United States Embassy, Kurt van der Walde, presented Commissioner of Police Celvin G. Walwyn with keys to a new Nissan Navara to be used by members of the Drug Eradication Programme in the Nevis Division.

During a brief handover ceremony, Mr. Van der Walde noted that the donation symbolizes the concrete support of the United States Government to the people of St. Kitts and Nevis and is in keeping with the objectives of the Caribbean Basin Security Initiative (CBSI) – President Barack Obama’s signature project designed to deepen regional cooperation and combat the drug trade and other transnational crime.

“It is also our way of recognizing the great work that Chief Walwyn is doing in bringing modern policing techniques to the Eastern Caribbean and to improve citizen security for the folks here in St. Kitts and Nevis,” he stated. “We intend to offer a lot more support in the coming year. We hope to have an announcement very soon about that for significant new resources for all the ideas and projects and energies that Chief Walwyn is bringing to the force here.”

In response, Commissioner Walwyn thanked the U.S. Government for the donation and noted that the vehicle will make a positive contribution to the drug eradication programme.

“We need equipment, we have been given a car and I can guarantee you that this will be used for that purpose and we will do everything we can to (advance) the fight to retake our streets,” the police head stressed, noting that the effort extends from neighbourhoods to the hills.