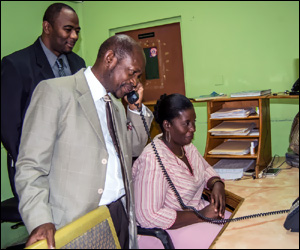 Constables in the Royal St. Christopher and Nevis Police Force (RSCNPF), members of the civilian staff and traffic wardens were saluted by Prime Minister the Right Honourable Dr. Denzil Douglas for enforcing the laws of the land which has contributed to a 39.5 percent decrease in crime for the first six months of the year.

The message was delivered on Friday morning (August 01) during engagements on the Out and About with the Prime Minister series where he meets with workers in key sectors.

The day started at Police Headquarters in Basseterre with PM Douglas observing operations at the Telecommunications Department – the communication nerve centre of the RSCNPF. Head of the section, Rueben Pollack, informed the Prime Minister, who was accompanied by Special Adviser in the Anti Crime Unit Dr. Norgen Wilson, that several improvements have taken place to enhance the service to the public. These include expanding the consoles handling 911 calls and centralizing the communication system among various police departments and units.

The officials then moved to a recreation area where an interactive discussion took place with members of the civilian support staff, which included interns from the People Employment Programme (PEP), working at Police Headquarters.

“I want to emphasize how important it is for you as civilians to be part of the maintenance of law and order in this country,” Prime Minister Douglas stressed. Ã¢â‚¬Å“I therefore want to use this opportunity to publicly thank you for the support that you are providing. I want to thank you and commend you and encourage you so that you may carry out your duties more efficiently.Ã¢â‚¬

The visit continued with a stop at the Police Training Complex where a dialogue ensued with constables from every police station and unit in St. Kitts and in Nevis. Several traffic wardens were also present to share their perspective in enforcing the traffic laws and protecting pedestrians and safe drivers.

The Prime Minister was able to update on several initiatives that were undertaken by the Government to improve the effectiveness of the Force. He touched on the order that was recently placed for 10 new patrol vehicles, a mobile command centre and the arrival of 16 new motorcycles to enhance patrol capabilities. The Minister responsible for the Anti Crime Unit also highlighted that the Government restored increments for the police and ensured that the 10 percent salary increase for civil servants over the next three years was also paid to law enforcement personnel.

Prime Minister Douglas assured the officers that serve in Royal St. Christopher and Nevis Police Force who are interested in becoming landowners, that there were opportunities being made for this. He also informed that Government will continue to work with the High Command in attracting additional training opportunities and safety equipment. The traffic wardens received high praise for their work, with the Prime Minister describing them as “God-send” to the elderly and school children.

The Prime Minister also encouraged the Police Welfare Association to be more active and to present recommendations to the relevant authorities on ways to empower the men and women and enhance the operations of the RSCNPF.

Constable Leroy James credited the Prime Minister for the support he continues to give to the security forces. Constable Mark Hanley, President of the Police Welfare Association, welcomed the dialogue and promised to strengthen the association so that regular communication can take place between the ranks, the High Command and the Government.