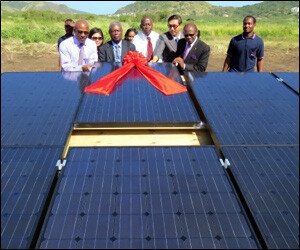 The Federation’s construction of a second solar farm is not only getting region attention, but is also making international headlines.

Last week, the Trinidad Guardian commended St.  Kitts and Nevis for doing the  environment proud with the start of construction of the second solar farm.

The IPS report on the ground breaking for the second solar farm, quotes the Prime Minister the Right Hon. Dr. Denzil L. Douglas as saying that his administration is “committed to free the country from the fossil fuel reliance which has burdened so many nations for so very long.”

Douglas’ aim IPS said is to harness the power of the sun “a power which nature has given to us in such great abundance in this very beautiful country, St. Kitts and Nevis.

“The energy generated will be infused into the national grid, and this will reduce SKELECs need for imported fossil fuels,” he said, referring to the state electricity provider.

According to the Independent Daily European Express, as environmental sustainability gains traction in the Caribbean, the executive director of the United Nations Environment Programme (UNEP), Achim Steiner, said the region is on the right track to better integrate environmental considerations into public policies.

“I think in some respects it is in the Caribbean that we are already seeing some very bold leadership,” Steiner told IPS.

“The minute countries start looking at the implications of environmental change on their future and the future of their economies, you begin to realise that if you don’t integrate environmental sustainability, you are essentially going to face, very often, higher risks and higher costs and perhaps the loss of assets.”

He said such assets could include land, forests, coral reefs or fisheries.

Caribbean coral reefs have experienced drastic losses in the past several decades and this has been cited by numerous studies as the primary cause of ongoing declines of Caribbean fish populations. Fish use the structure of corals for shelter and they also contribute to coastal protection.

It has been estimated that fisheries associated with coral reefs in the Caribbean region are responsible for generating net annual revenues valued at or above 310 million dollars.

The International Renewable Energy Agency (IRENA) released a new report Monday which provides a plan to double the share of renewable energy in the world’s energy mix by 2030.

IRENA’s renewable energy roadmap, REmap 2030, also determines the potential for the U.S. and other countries to scale up renewable energy in the energy system, including power, industry, buildings, and the transport sector.

This report adds to the growing chorus of studies that show the increasing cost competitiveness and potential of renewable energy in the U.S,” said Dolf Gielen, Director of IRENA’s Innovation and Technology Centre.

“Importantly, it shows the potential of renewables is not just limited to the power sector, but also has tremendous potential in the buildings, industry and transport sectors.”

Next week, efforts to scale up global renewable energy expansion will continue as government leaders from more than 150 countries and representatives from 110 international organizations gather in Abu Dhabi for IRENA’s fifth Assembly.