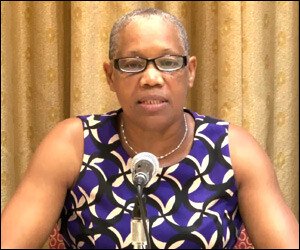 Minister of Health Honourable Marcella Liburd has commended local efforts to safeguard and prepare St. Kitts and Nevis in the unlikely event that the Ebola Virus Disease (EVD) is detected in the Federation.

She reported that rigorous checks and screenings are taking place at the borders of the Federation at all airports and seaports and that all workers at such borders were sensitized as to the necessary precautions and actions that should be undertaken. The Minister further revealed that a nurse is stationed at the Robert L. Bradshaw International Airport and applauded the St. Christopher Air and Sea Ports Authority (SCASPA) for the refitting of a space for the quarantine and isolation of travelers suspected of having EVD. Preparatory activities also include the refitting and equipping of a treatment centre.

These revelations formed part of the Minister of Health’s presentation at the sitting of National Assembly held Friday, October 24. She relayed this information from a report from the St. Kitts and Nevis Ebola Readiness Working Group of the National Disaster Mitigation Council to which the Federal Cabinet has oversight. It was revealed that the working group had met on October 23 and along with Cabinet had outlined the Federation’s Ebola readiness.

“Our preparation is focused on preventing the entry and spread of this disease in St. Kitts and Nevis, while working in collaboration with our counterparts in the OECS [Organization of Eastern Caribbean States] in Latin America and the Caribbean and globally ““ to prevent the entry of the disease into those countries yet unaffected, contain and stem its spread in affected countries,” Minister Liburd emphasized. “Our focus is on surveillance, prevention, care and bio-safety, strict compliance with international health regulations and adaptation of World Health Organization (WHO) and Pan American Health Organization (PAHO) protocols to suit our environment.”

Minister Liburd noted that the travel restriction on persons from Liberia, Sierra Leone and Guinea along with persons who had recently visited those areas was a protective measure.

“We have implemented a travel ban from the three most infected countries as a precautionary and a preventative measure, as a small country with limited resources and not to spur discrimination and stigma,” Minister Liburd emphasized. “That is why even when some people were calling for the inclusion of Nigeria in the travel ban and some countries had included Nigeria, we did not. Our decision was based solely on the data and the facts. We are therefore pleased that the World Health Organization has recently declared Senegal and Nigeria to be Ebola transmission-free.”

The Minister of Health further elaborated that since August of this year, healthcare workers at all levels had been receiving training while a Draft of the St. Kitts and Nevis Ebola Procedure Manual had been crafted as well as a Management of Ebola Disease Draft Plan by the Community-Based Health Services.

She took the opportunity to acknowledge Nurse Kerry Tuckett, Inspector Abddias Samuel of Fire and Rescue Services and Dr. Dwain Archibald who were the certified trainers who had overseen the instructing procedures to be undertaken should a case of EVD be identified.

The Minister responsible for Health, publicly acknowledged and thanked Regiwell Francis who donated infra-red thermometers, goggles and other Personal Protective Equipment (PPE). She also thanked the nurses and doctors and other health professionals who had volunteered to be part of the Ebola Task Force and noted that a case would be made for them to receive risk pay.

Other critical elements that were identified was the need for a public education strategy and communications strategy which would include radio and television appearances by key persons, postings on social media, distribution of leaflets and town hall meetings.