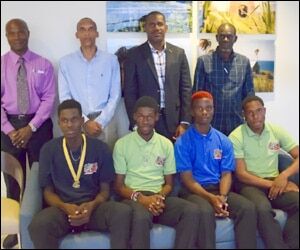 St. Kitts and Nevis’ performance at the 2016 CARIFTA Games was commended when the national team returned from Grenada where the regional competition was held last weekend.

A delegation of government and sporting officials welcomed Jermaine Francis, Tah-j Liburd, Leroy Chapman and Dimetre Browne. Francis was the most successful of the four winning gold in the Under 20 Men High Jump. The other three performed creditably in their respective categories.

Deputy Prime Minister and Minister of Sports, Honourable Shawn Richards, attended the brief welcome ceremony for the athletes, coaches and officials at the VIP Lounge at the R. L. Bradshaw International Airport. He brought greetings on behalf of the Prime Minister, Dr. the Honourable Timothy Harris and the rest of the Cabinet of Ministers and told the young men that the experience will serve them well in the future.

“You were given an opportunity to compete amongst your peers to further develop your own athletic skills,” Minister Richards said, adding that the local competition level is completely different to that on the regional and international scene. “You have gone on the regional stage and you have done well.”

He encouraged the young men to remain focused and committed with a positive attitude. The deputy prime minister reinforced the value of training to athletic success and reminded that discipline is fostered by such.

“Continue to do the Federation proud but most importantly continue to do your own self proud by going out and being the best at what you do,” Richards concluded.

Leroy Chapman thanked the government and the St. Kitts and Nevis Amateur Athletic Association (SKNAAA) for their support and the opportunity to represent the twin-island federation at the event. All of the athletes said they were grateful for the experience.

This was the 45th edition of the CARIFTA Games.