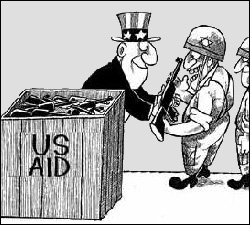 US Taxpayers To Foot The Bill…Again

The United States Government is spending U.S. $1.67 million in the form of maritime intercept vessels and support equipment this year as part of a US$2 million in military and security support to St. Kitts and Nevis this year, compared to US$560,000 last year.

The Caribbean Basin Security Initiative (CBSI) is a multi-year, multi-agency programme which fulfills U.S. President Barack Obama’s commitment to deepen regional security announced at the 5th Summit of the Americas in Port of Spain and the US administration continues to engage with St. Kitts and Nevis in an effort to strengthen its security and military forces.

In a statement, the Embassy said Law Enforcement Cooperation in the region is a key U.S. priority and these efforts are continuing under CBSI.

Funding and equipment for security services as well, including US$63,100 in 2010 for equipment for the police service were providing.

From 2010 to present, under a U.S. Anti-Terrorism Assistance Program  (ATA), 12 St. Kitts and Nevis law enforcement officers have been trained in computer and digital evidence forensic investigative techniques.

“This training allows them to take full advantage of the resources of the ATA-funded Computer Investigations Laboratory in Antigua,” said the statement.

It added that in the same period, the United States donated to St. Kitts and Nevis, related investigative equipment totaling US$12,000.

The US Embassy said the Government of St. Kitts and Nevis and the U.S. Government collaborate closely in the area of drug enforcement with the United States providing US$17,000 for the St. Kitts drug squad to purchase a vehicle, while also completing a marijuana eradication campaign, provided uniforms to the St. Kitts military, and donated a laptop computer to the Royal St. Kitts and Nevis Police Drug Squad in an effort to boost their capabilities.

CBSI involves the active participation of every regional government, including St. Kitts and Nevis, and features the provision of training, equipment, and other programmatic assistance to address all aspects of commonly-identified challenges to regional security.

The United States provided more than US$45 million to support CBSI in its first year, and President Obama has requested US$73 million for 2012. This program addresses not just traditional interdiction and law enforcement efforts, but also institution building, reform, and prevention through targeted social programs, with priorities being identified with its Caribbean partners.

The U.S. looks forward to remaining engaged with the Government of St. Kitts and Nevis (GSKN), in developing specific priorities and programs under CBSI.

1 thought on “St. Kitts – Nevis Receives 2 Million in Military Assistance From US Government”